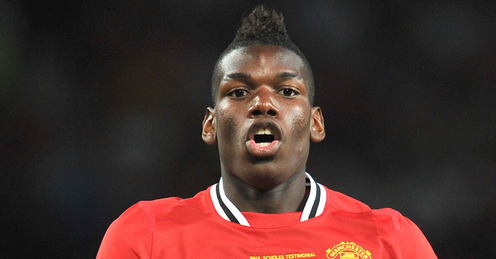 In recent weeks, Paul Pogba has been heavily linked with Manchester City and a number of Italian clubs. These rumours came about when negotiations with United suffered a set back because the French youngster wouldn’t agree terms.

Newspapers across Europe suggested that the 18-year-old would be able to leave this coming summer on a free, however, Sir Alex Ferguson made it clear on Friday that the club have the option to extend his current deal for another year.

We have an option on Paul’s contract that takes us into a year-and-a-half away so in that respect there’s not a great emergency about it,” Sir Alex said. “But we’d like the boy to sign a contract and if he’d like to be a Manchester United player then he knows what to do. There will be chances here. We’ve got players capable of wearing the red jersey, and they’ll wear it with complete confidence they can do well.”

Ferguson then went on and made it clear that bigger contracts elsewhere shouldn’t make him panic about current circumstances, ignoring his agent because he probably thinks otherwise.

“He’s got an agent who’s obviously become a bit difficult but we’re negotiating with this agent and we want the boy to stay,” Ferguson insisted. “But it’s down to the individual also. Matt Busby summed it up perfectly, that you don’t need to chase money at a club like Manchester United, it will eventually find you. If you’re good enough, you will earn money and become rich playing for us, there’s no doubt about it. You hope he gets the right advice. All the young players who remain here always do well. It’s one of these situations that they can chase the money early in their career but at the end it’s not the same as if they’d stayed here. It’s the decision the player has to take himself, no matter who he is, about where they think their best future will be. He just needs to look round about him to realise that. But if he wants to go, there is nothing we can do about it.”

4 responses to “Fergie: If Pogba wants to be a United player, he knows what to do”