At any level, Manchester United vs Liverpool is a crunch game and the Reserves on Thursday night proved no different. The highest attendance of the season at Moss Lane saw the two fierce rivals go head to head in Altrincham. Both sides fielded strong sides with Paul Pogba, Darron Gibson and Kiko Macheda all earning starting berths for United and Jonjo Shelvey for the men from Merseyside.

The game kicked off and the early stages of the game were quiet until Liverpool winger Suso appeared to kick out at Pogba during a tussle on the ground, after some deliberation, Suso was sent off and Liverpool would have to play with 10 men for the remaining 70 minutes. Chances were hard to come by but Will Keane and Pogba both fired narrowly wide before the break. 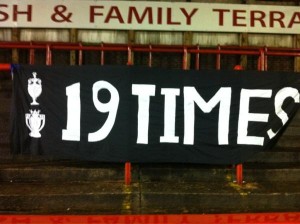 Half time arrived with the score line still goalless, those in attendance at the game were pleasantly surprised to see Ravel Morrison signing autographs and chatting with fans, the reason for Morrison not participating in the game is that he has still not fully recovered from the injury he sustained against Crystal Palace.

United really began to take a grip of the game in the second half, and just minutes after the restart Will Keane grabbed his 5th goal in as many games with an excellent left foot finish. A second goal was just around the corner for United as substitute and birthday boy Jesse Lingard fired home to make it 2-0.

It was now a matter of how many United would put past Liverpool, and they continued to impress after last week’s bad defeat at Sunderland. The excellent Paul Pogba rattled the bar soon after from a long way out that would have rounded off a sensational team goal, but United didn’t have to wait much longer, Mama Biram Diouf scored to make it 3-0, a cool finish under pressure.
With just 10 minutes left, Diouf got his second of the night in almost identical circumstances to his first, coolly slotting the ball in off the post. There was time for Petrucci and Fornaiser to come off the bench but the latter stages of the game saw United control possession and dictate play.
The game finished 4-0, a professional performance from United but still a sweet victory over bitter rivals Liverpool. The reserves remain top of the league and with the first team squad being hit by a series of injuries; a few of lads will fancy themselves to get a run out in some shape or form.