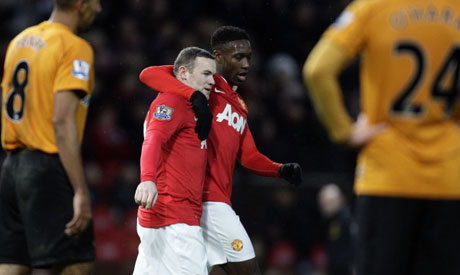 1. After the depressing week we have witnessed, three points were essential against Wolves to help cure a certain Champions League hangover. We’re the sort of club that thrives on entertaining football but that’s been limited this season and we have had to sacrifice it for scruffy 1-0 wins. Thankfully, it was a different story today and we got the ball on the ground and played some free flowing football with a number of individuals putting in the type of work shifts we expect at this standard. Although, it’s important we don’t get ahead of ourselves. Lets see if the lads can do this consistency and against better sides than Wolves who have the second worst away record in the league this season with Swansea edging it.

2. In previous games, fans have been left frustrated by the number of chances we’ve wasted. However, the players put that behind them Saturday by scoring four goals, something we haven’t done since the 5-0 win against Bolton on 10 September 2011 – the game Tom Cleverley suffered his first injury of the season courtesy of Kevin Davis. All of the goals came from impressive build up play and displayed top class technique, especially Wayne Rooney’s second.

3. The only goal we conceded came from Steven Fletcher, who this season has the most goals scored with his head. Funnily enough, it was Patrice Evra, a 5 ft 8 in full back that was caught in a useless position with no chance of stopping Fletcher’s effort. In all fairness though, it was an excellent header.

4. Rio Ferdinand was key to our good defensive performance on Saturday. Wolves put plenty of crosses into the box, like Ferguson said in his post match interview, and Rio got his head to the majority with Evans covering whenever called upon. There’s been a lot of talk about Ferdinand lately whether we should get rid of him or not, but if he keeps playing like this it wouldn’t be the wisest of decisions to sell. Especially with Vidic’s season cut short due to a ruptured cruciate ligament injury.

5. Both wingers put in a good shift today. Nani started on the left side and looked lively straight from kick off but the same could be said about Antonio Valencia, who in all honesty hasn’t been himself since the season started in August. In defence of the Ecuadorian, you could say he was put into unfamiliar positions like full-back which obviously isn’t his natural trade. However, he got the ball and ran at defenders before putting dangerous crosses into the box, just like he used to. Nani’s performance tough, cannot be forgotten or overlooked. Whether you’re a fan or not, the Portuguese winger is very important to this squad and without him we’d look rather flat. After 77 minutes, Nani was replaced by Young who has found it difficult to impress in recent weeks due to inconsistency. This was something I noticed during his time at Villa Park.

6. Since the game finished, there’s been an obsession with those who performed well, which is nice to see when we’ve spent the last few months being negative about the team. Phil Jones earned man of the match from Sentanta Sports, and rightly so. He didn’t do anything wrong throughout the game and sat behind Michael Carrick in a defensive midfield role – not only sitting in front of the back four but getting back there to help them whenever needed. Carrick, on the other hand, put in another excellent performance in a more advanced role. He surprising added creativity to our attack with a number of superb passes, splitting the Wolves defence a number of times.

7. The atmosphere seemed to shock everyone at the ground. The Old Trafford faithful were full of voice when singing “Oh Channel 5 is wonderful, it’s full of tits, fanny and United, oh Channel 5 is wonderful,” in reaction to being knocked out of the Champions League and ending up in the Europa. On the other end were the Wolves supporters who seemed confused chanting “6-1 to the Champions.” This left some wondering who exactly they supported…