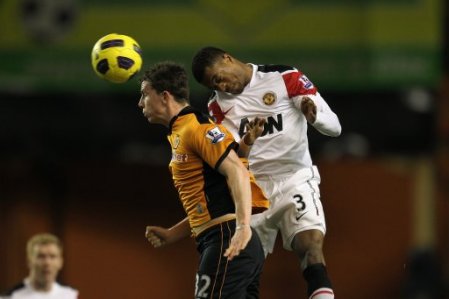 In preparation for the game against Wolves this weekend, I’ve asked Graham Large a few questions on his team and their season so far. He is the man behind a great project called ‘It’s Round and It’s White‘. This website allows aspiring writers from all clubs to express their very own opinions and discuss every aspect of the beautiful game together. You can follow his website on Twitter by clicking this link.

Wolverhampton Wanderers are currently positioned fifth from bottom in the Premier League. What do you think of the season so far and where realistically do you think Wolves will finish?

The season started well, we beat Blackburn and Fulham and then managed to get a point against Aston Villa, which actually put us at the top of the Premier League for a couple of hours. Unfortunately, since then we have lost 8 out of following 11 fixtures, with just two wins both coming at home against Wigan and Sunderland.

It was never going to be an easy season for us. I said at the beginning of the season that I would be happy to secure survival first and then worry about where we will finish.

Despite the bad run of form, I still think we will stay up and 11th-15th is a realistic aim.

The last time Wolves managed to walk away from Old Trafford with three points was back in 1980, beating us 1-0. What are the chances of seeing a similar result this weekend?

Never say never. We defied the odds last season and won 2-1 at Molineux, but getting a win at Old Trafford is a completely different challenge. I would be delighted if Wolves were able to pick up a point tomorrow in all honesty.

With a goal difference of -9 something obviously isn’t right. Is there a particular position you are worried about or is there certain individuals letting you down?

Our defence is a huge worry to me. At the start of the season I genuinely thought Roger Johnson would be the man to organise the back four and prevent us from leaking goals by the bucket load. I was even quoted in an interview as saying “He is a born leader, and McCarthy making him captain is a huge statement of intent”. How wrong I was!

Johnson has not exactly endeared himself to the Molineux faithful so far; he was handed the captain’s armband upon arrival, yet at times he has been the least vocal player on the pitch. He has also been very critical of the fans’ treatment of Mick McCarthy and Karl Henry during the recent run of bad form.

If Johnson had been putting in consistently good performances – I would not be annoyed by his comments, however he has been directly responsible for a large amount of goals that Wolves have conceded this season. I was personally very happy to see him dropped to the bench against Sunderland, with Jody Craddock being brought back into side.

Johnson’s exile will be short lived, as Craddock is ruled out of tomorrow’s game through injury, and hopefully it will be the reality check he needs to return to form.

There are other member’s of the side who have struggled to find form this season (Matt Jarvis and Richard Stearman in particular) but none more noticeable than Johnson.

There’s been a lot of talk lately amongst Wolves supporters regarding expensive ticket prices. Some fans have even attempted to keep the ground quiet for a solid 10 minutes to express their frustration, but that failed. Where do you stand in this argument and how much on average would it cost to watch a game at Molineux?

I agree that ticket prices are too high. For a fan without a season ticket, it can cost anywhere between £24-£40 for a match ticket at Molineux depending on where they choose to sit. However away tickets have been quite expensive for supporters this season; in particular Aston Villa (£43) and Chelsea (£47-£50).

The concept behind “Take Back The Game” was taken from a top flight game in Sweden two months ago where supporters of AIK and Djurgarden stayed silent for the opening 10 minutes of their game. This was designed to show the Swedish football governors how important fan power is. A group of Wolves fans decided to run with a similar idea during last weekend’s match with Sunderland – it wasn’t as successful.

Although I agree the principle of the protest, I was skeptical about the idea in the first place; I struggle to stay quiet for one minute during a live match, let alone ten minutes.

A number of United fans, including myself, feel bitter towards Mick McCarthy due to the way he treated Roy Keane in Saipan before the 2002 World Cup. He became manager of Wolves in 2006, but are you pleased with was he’s done with the club?

I am delighted with what Mick McCarthy has done for Wolverhampton Wanderers over the last five years.

When he arrived, Wolves were favourites for relegation after Glenn Hoddle had walked out on the club during pre-season and had just 13 senior players available. Over the past five years, McCarthy has defied his critics by winning the Championship title and delivering three consecutive seasons of Premier League football to Wolverhampton.

Some fans believe that Mick has taken the club as far as he can and it is now time for a change, whether this happens remains to be seen. I think if we had lost against Sunderland last week, he would’ve had to go and I wouldn’t have argued with the decision based on our recent run of results. We have two crucial home games coming up against Stoke and Norwich, let’s see how Wolves perform in those two games before potentially assessing the managerial situation.

Ask me at 5pm tomorrow night Dale, I never do predictions!