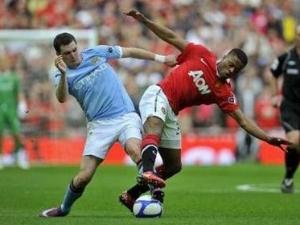 Manchester United have been drawn away against Manchester City in the 3rd round of the FA Cup.

I personally don’t think we could have asked for a better draw today. In recent years the Manchester Derby has reached new heights with City starting to compete more all thanks to Sheikh Mansour and his massive wallet.

The last time both teams met in the FA Cup was last season, and it was certainly a day to forget on our behalf. The blues managed to knocked us out after a 1-0 win in the semi-final – yes, the same day Paul Scholes received a red card for a high lunge on Argentinean full-back Pablo Zabaleta.

This tie is to be played at the Etihad Stadium on the 7th/8th of January 2012. Hopefully we can turn it around this time, sending them out of the competition. It’s something they’re surely used to anyway, being a small club.

Unfortunately, there’s not much to say about the other draws that were made. Liverpool (Southend United or Oldham) and Chelsea (Portsmouth) fans who usually talk about us getting the ‘easy draw’ must feel a little contradicted.