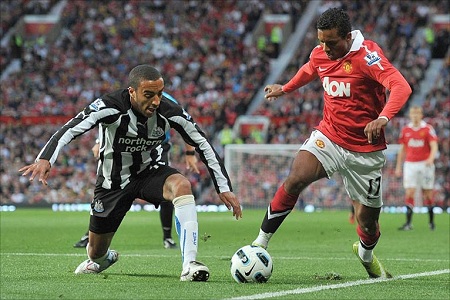 1. From kick off United looked to be on the front foot, taking the game to Newcastle. The Magpies, however, were in a resilient mood, allowing United to pass the ball around but ultimately scuppered our attacks. Newcastle themselves grew in confidence but were not overly eager to risk too much going forward. They created a number of chances but poor finishing and final balls let them down.

2. At the back, the return of Vidic is always reassuring. Not only to us the fans but to those around him. This was the case on Saturday. On the whole, United were well organised and individuals were rarely finding themselves out of position. I never found myself thinking “they could get one soon.” Defensively United are beginning to look a far more confident unit and I do believe that Rio in partnership with Vidic is a major reason. The two have a wonderful understanding which doesn’t only help the defence but also allows those in front of them the confidence to play and push forward with greater purpose. Something which we have been missing of late.

3. Once again we are seeing David de Gea grow with every game and is becoming far more assured. We are now seeing him come more confidently for crosses. Newcastle can be as physical as you like at set pieces but our young keeper made the right decisions of when to come and when not to come, letting those around him know what was going on. When he did he gathered comfortably. For all the good work he did at talking to defenders and taking crosses, by far his best moment was a world class reaction save to deny Newcastle. This was no “in the right place at the right time save,” as he had to reach up and to his right, getting two strong hands to the ball and sending away for a corner.

4. Unfortunately the young Spaniard was not the only goalkeeper on display who was proving his worth. In the Newcastle goal Tim Krul was United’s nemesis. This was truly a Brad Friedel verses Manchester United version 2.0. But my God, he had to be on the very best of his game to deny our best attacking performance since the Bolton game. Stats after the match showed United to have a massive 60% of possession and an enormous 29 shots!

5. In the first half Newcastle only allowed United a few chances; the second half was a different story. Nobody could have denied United deserved the lead but a goalless first half left us wondering once again how we were going to unlock a resilient defence. The United goal had a huge chunk of luck with Rooney’s shot being charged down and deflecting onto Hernandez, who knew nothing about it, before rolling over the line – before anyone asks, I can’t make out what it bounced off this time. You make your own luck in football, and the way United approached the game, with an attacking manor, always meant that bombarding the Newcastle goal would lead to something. This is the United spirit that I have come to know over the past 30 years.

6. Our luck though wasn’t to be just good luck though. Our midfield was commanding, Michael Carrick once again proving his worth to those who don’t believe in him, and Newcastle were floundered by us. But when Ben Arfa ran at our defence into the United box the game was to take a major turn. Rio Ferdinand made what I can only describe as the cleanest of tackles you will see on Ben Arfa, knocking the ball into touch for a corner. I had been watching and was about to tweet “Rio at his best” when the commentator exclaimed that a penalty had been given. I, along with everyone else (including the Newcastle players) were in complete disbelief. I had clearly seen the ref signal a corner, and when he was consulting the linesman who had made the call I was 100% confident that he would stick to his original decision. He didn’t, and gave the penalty. The decision to award a penalty by the linesman will be something that will haunt me forever, a truly unbelievable decision. However, this lifted United and showed me something which had not been too evident this season when we’ve had our backs against the wall: spirit and desire.

7. The final twenty minutes took me back 15 years. United bombarded the Newcastle goal with wave-after-wave attacking display. They were nothing less than brilliant. However, Newcastle were magnificent in defence, inspired by Krul’s brilliance. I think everyone expected United to score again to take all three points but world class saves, goal line clearances, struck posts and what we thought was the winner by Hernandez being ruled out for offside. A marginal decision that still splits opinion.

8. On another day we would have scored five, we would not have been left wondering “what if” because of a ridiculous decision. But we have to take this on the chin. Is it consolation that yes, we do get dodgy decisions go our way from time to time? In hindsight maybe, but in the moment and the immediate aftermath of a match, no, not a bit.

9. There has been criticism that this match highlighted our goal scoring problems. Yes, it does to a certain extent. No team, let alone Manchester United, would be happy scoring just one goal after displaying a total of 29 shots. Although, I believe this really was just one of those games when a couple of completely inspired Newcastle players thwarted us. I was very happy with the United performance and we are certainly going in the right direction. The criticism we have had for the lack of creativity in midfield was put to bed, for this match at least and once again in the Premier League the defence looked sound. Do we need to worry about the lack of goals? Personally, I don’t believe we do if we can maintain the spirit and desire we showed against Newcastle. Once again, on another day we would have scored a hatful.

10. I can say with confidence that the match left me more frustrated than I have been for some time. I would honestly not have felt so wound up if we had lost the game fairly and squarely.

11. I can’t finish without mentioning the Manchester City result. Saturday evening left us with the threat that City would be 7 points clear at the top. As it happened Liverpool held City and the weekend finished as was between United and City. That has left us in good shape still but it does add to the frustration as that we could, and should really be just 3 points behind. But 5 is better than 7 and we should be spurred on by this. Yes, Spurs can now go above us should the win their game in hand but for now they are not our main concern.

2 responses to “Reaction to draw against Newcastle”