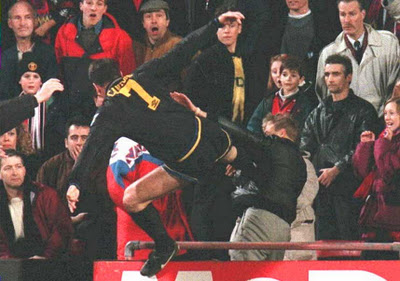 In preparation for the quarter final of the Carling Cup, I asked Ed Malyon a few questions on Crystal Palace. He is a sports & betting writer for the Mirror, FourFourTwo, Goal.com, SPIN Cricket Magazine amongst others. You can follow him on Twitter by clicking this link.

1. The last time United travelled to Selhurst Park was in 2005 – the same year Palace got relegated to the Championship. How much do you miss playing the likes of us (big clubs) frequently?

Not at all really, the Championship is an excellent and exciting league and for many fans, the so-called ‘big four’ and the Premier League symbolise everything that is wrong with modern football, and the reason that under previous ownership we nearly went to the wall. We would much rather have a financially solvent club with prudent owners and a team full of academy  products, something we are very fortunate to boast at the moment.

2. The Eagles haven’t scored in their last five Championships games but three of those were scoreless draws. They are also positioned 10th in the league, so what are the chances of seeing your team promoted to the Premier League for next season?

It is unlikely that we will go up, but at the start of the season we just wanted stability after nearly being liquidated in summer 2010 and nearly getting relegated last year. With a full pre-season behind our new manager and some of the best prospects in the country, we were quietly confident of surprising people but being in the top 3 earlier this season was an overachievement that we were never going to be able to sustain. Anyone can make a run for the playoffs and that includes us though.

3. Judging by the stat revealed in my first question, it appears obvious that Palace are stronger in defence than up front… Is there anyone in particular we should be looking out for?

Nathaniel Clyne is our right-back and a product of the club’s youth setup. He is still young but has played over 100 games for us which is testament to his ability. He is quick, which means that he can usually recover from mistakes that he does make but unfortunately he looks set to leave the club when his contract runs out in June. He will go with our best wishes having been a good servant to the club and we will be getting some sort of fee/compensation whether he goes in January or June.

4. In a recent interview, Dougie Freedman said: “It is about the players enjoying themselves and providing the fans, who have stuck by us through relegation and administration, with a great night. It is amazing to think we are playing Manchester United in the last eight of the League Cup this season. Who would have thought that would happen?” What exactly does this mean, in your opinion? Is Freedman accepting defeat before kick off, or will he be expecting his players to go out and get a result?

Dougie is doing what he always does, which is play down our chances and be very canny with the media. He is in charge of a lot of young players and, therefore, he does a lot to deflect attention from them and keep pressure from their shoulders. Of course we were going to be underdogs at Old Trafford, but by telling the players to enjoy themselves, it means the creative players will have the freedom to do what they want compared to the pressure of league games. It will be a welcome break.

5. Are Crystal Place supporters still bitter towards Eric ‘The King’ Cantona after his kung-fu attack on Matthew Simmons?

Very much so, principally because of the nauseating media love-in which persists over the man who is to all intents and purposes, a violent individual who should have seen jail time for his actions yet managed to get portrayed as some sort of tortured artist. If he had been from Liverpool rather than France, safe to say nobody would have bought into his repugnant charade and justice would have been served.

What followed, with the tense atmosphere at Villa Park years later and the death of family man Paul Nixon, only serves to aggravate Palace fans more when the legions of United supporters who have no true knowledge of the situation, defend C*ntona’s actions and seem to find some sort of perverse humour in it – exemplified by the wearing of Cantona masks in the last visit to Selhurst Park.

My prediction is 1-1 as this United side is papering over the cracks of seasons-by. Just look at the amount of shots they’ve allowed on goal this season, and compare their other defensive stats. We will fight for our lives, and nick a goal to take it to extra time; when who knows what may happen.

11 responses to “A view from the enemy: Crystal Palace fan on recent results, Cantona and their youth setup”