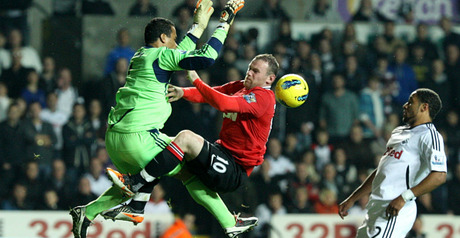 Wayne Rooney didn’t train with the squad Monday ahead of the Benfica game but Ferguson still thought he’d be fit enough to play against the Portuguese champions, Tuesday night. That wasn’t the case and now there’s a possibility he could miss the match on Saturday too.

Rooney sustained a hip injury during the win over Swansea last weekend when he collided in the air with goalkeeper Michel Vorm. He got up of the ground and played the full 90 minutes without another issues. It remains to be seen whether or not he will be available on Saturday when we host Newcastle at Old Trafford.

When asked about Rooney’s condition, Ferguson said: “He wasn’t fit (for the Benfica game), so we need to wait to see what he is like over the next few days.

“We will give him every chance, of course – we did for this, but he wasn’t really fit, so we’ll just have to wait.”