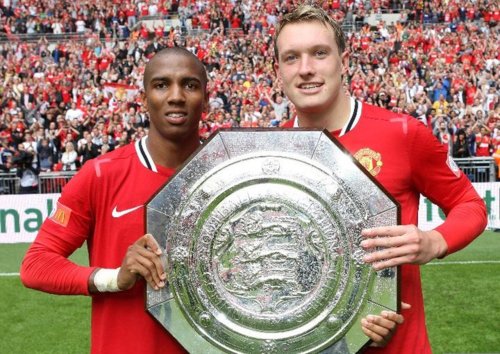 Speaking to Nick Coppack in a web chat after lunch, Phil Jones answered a number of questions which came directly from supporters on Twitter and the club’s official website.

One of the questions asked was in relation to his favourite moment since joining Manchester United. He proudly mentioned our victory over City in the Community Shield.

As you know, United were trailing 2-0 at half time but kept the faith and displayed a comeback, winning 3-2. The winning goal was converted by Nani after a lack of communication between City’s back four.

Jones admitted that before he signed last summer, he hated the way we frequently scored last minute winners, but now it occurs like a moment of bliss.

“My favourite moment was probably winning the Community Shield,” Jones said. “I’d never won a competitive trophy before. That was really nice and probably my favourite moment so far. I’ve had a lot of good moments so far but that was probably the best one. I thought to myself at Wembley: ‘I’ve been here two minutes and I’ve already got a trophy.’ I used to think, ‘I can’t stand that club when they always score in the last minute.’ But now I love it. I’m not complaining one bit.”