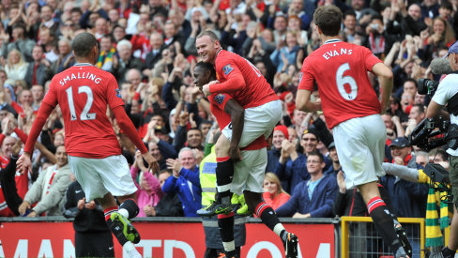 The 2011/12 season is, at the time of writing, ten games old. We gave just passed the quarter way point and we are still at an early stage. However, Manchester United have what may appear to be an advantage over the other pretenders to our thrown. This advantage is quite simply that we have now played all of last seasons top 6, unlike our rivals. With that in mind, and with the like soy City playing the leagues ‘big’ teams on the approach to and during the busiest point of the season (Christmas), finding ourselves five points behind the leaders quite possibly sees us sitting pretty.

Personally, I don’t believe that having now played the likes of City, Liverpool, Arsenal, Chelsea and Tottenham Hotspur means that comparison can be drawn from the games against the individual teams. Football is indeed a funny old game and anybody is capable of beating anybody on any given day.

For example, the 8-2 win over Arsenal was against an extremely poor Arsenal side, who are only starting to find consistency. This did however show where our strengths truly lie, attacking with pace from either wing. It was lost in the euphoria of the result that during the game Arsenal did manage to make chances and maybe on another day things could have been different. The same can be said for the match against Chelsea. No matter what his form, Fernando Torres I doubt would ever miss that open goal again. A goal that would have given Chelsea a momentum that could have changed the result. So maybe we road our luck a little in the matches against some of last year’s top six, and perhaps the results are a little flattering. On the flip side to that however is the match against ‘Stockport’ City. A humiliating result, to say the least. A game in which the frailties that were exposed a little in pervious games were punished. Now nobody believes City are a team which are really 6-1 better than Manchester United. So we cannot really compare ourselves in these games and therefore we have no advantages in that respect having played them.

So what are the advantages of having played the leagues best before they all played each other? Firstly and most obviously, we have picked up points against them all expect City. It is always better to have points in the bag. Those who are going to be challenging at the end of the season will soon be taking points off each other. This will give us the opportunity to close the gap on City and pull away from a little from those sitting just behind us. Yes, we will need to be winning our games while they fight it out, but our next run of games is one which we would normally be expect to gain maximum points from. Our current form is not brilliant however, so nothing can be expected at this very moment, and nothing would be a surprise. Our form and squad is something we’ll get to short. Points in the bag are City’s big advantage, having the points in the bag and putting us under pressure to win points when they may be dropping them.

Apart from us taking a good points tally against these teams, while they will be dropping points against each other we have to take into account of the relative league positions at current. As we have just discussed, the teams around us have yet to face many major challengers unlike ourselves. That alone should give a clear indication that Chelsea, Tottenham, Liverpool etc show a lack of consistency which can ultimately rule a team out of contention. That fact that we are second and only five points behind leader City having played very tough games is a clear indication that no matter how we are playing we are looking good in terms of where we want to be.

The fact is though we have not been at our best since the Bolton match, in which Tom Cleverley picked up an injury thanks to Kevin Davies. In all fairness we have been nothing but poor defensively all season. Couple that with the lack of creativity we have in the centre of midfielder without Cleverley, and our league position fills me with greater hope than it normally would, believe it or not. I am a firm believer in consistency in defence. So far this season we have been without much of what we would have expected to be our first choice back four. We have had a young pairing at centre back in Phil Jones and Jonny Evans. We have all been impressed with Jones but Evans has come in from some criticism, unfairly in my opinion. He has had to step up and given his greater experience than those around him (except Evra) has been under the most pressure to organise the defence. As the senior Centre Back this is his responsibility. Fortunately we now have Vidic back in the side. Vidic will naturally lead the defence now and as a result I fully expect this area to tighten up greatly. Further improvement will happen along with the continued growth David de Gea. He too came under enormous pressure early in the season from the media, but he is now finding his feet well. As the language barrier is also broken down his confidence will also grow and he will be able to put defenders at ease even more, and improve the defensive organisation. With these likely developments in mind I see us going from strength to strength, in the sense that we will be getting more comfortable in games.

While the defence is in my opinion is something we shouldn’t be worrying about as a unit, the central midfield is another kettle of fish. During the last few games I have heard fans despairing of the lack of creativity and a lack of a ball winner too. It is hard to argue. As I touched on earlier it has only been Cleverley who has shown the quality to create that you need at the highest levels. We have seen glimpses, as we always do, of Anderson being majestic but this is becoming fewer and further between. I can’t say I’m comfortable in being reliant on a young player, who has played only a handful of games for the first team, being our creative force in the middle of the pitch. Not that he isn’t capable, but there is a lack of natural options. He also looks like he brings the best out in those around. With regards to the defensive element of central midfield, it is a balancing act which needs perfecting. It is well sounded that we have given many chances away this season so far, but this I feel is down to the balance of the team. Early on we attacked teams with pace and vigour, but this leaves gaps between midfield and defence. These gaps were exploited, so Sir Alex has looked at remedying this situation. As a result our attacking vigour has had to drop off a little.

Only time will tell if the manager feels he needs to make any moves in January to improve the central midfield. Obviously attempts were made in the summer to strengthen the area, so the rumours will be rife come Christmas. Now that players are cup tied etc I’m not sure if there will be signings. One thing is for sure, there will be no panic buying. There are some options should there be no signings, however. I’m a fan of Park in the centre and we all know Giggs can do a job there. Granted Park and Giggs are not natural central midfielders but more often than not will produce solid displays. Defensively, Carrick does an important role sitting in front of the back four for added protection when required, while Fletcher, still suffering from the effects of his virus I believe, may see his role change to be more of a holding midfielder. Finally Jones is quite likely to be played in midfield, even more so when we have a full strength defence.

So as we move towards the Christmas period, possibly the most important time of the season, I believe the start of our season has been encouraging, big scalps taken and a team that should continue to grow in strength I believe. Yes, we have had a bit of a dip in form but the results keep coming and now our main rivals will naturally drop points when playing each other, giving a more realistic league table. Don’t get me wrong, there is an awful lot of work to do to have the team firing on full cylinders but things look good. And, hey, we always come on stronger in the second half of the season and we never make it easy for ourselves.