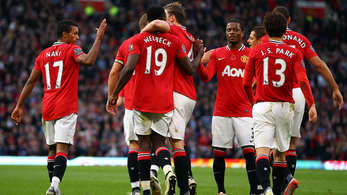 1. In the first half, we were way too patient when it came to attacking Sunderland. Saying that, Steve Bruce’s men would have been more than happy if they walked away from Old Trafford with a (draw) point, so plenty of them got behind the ball and sat like a wall, throwing back everything that came at them. Thankfully, we scored just before the interval so the Black Cats had no other option but to come out with a different approach in the second half, and try to go for it. They left more gaps in defence and midfield and when looking at the performance, you can see we took advantage of that by showing glimpses of free-flowing football in the second half along with some magnificent passing. It looked like there’s some confidence is growing within the group and that reminds me of a famous Ferguson quote we used in a piece dedicated to the man yesterday; ”Only true champions come out and show their worth after defeat- and I expect us to do that.”

2. Wayne Rooney started in midfield for the third consecutive game, so I’m sure that will be a topic of discussion for another few days. At the start, it looked like Lee Cattermole was going to stick tight but that died off after a while and Rooney began to run wild. When there was more space on the pitch in the second half, Rooney started giving those long diagonal ‘Hollywood passes’ out to either wing and that set up a few chances which we were unlucky not to score from. Looking at his overall performance, I think he deserved the man of the match award. However, I don’t believe Rooney is the long term solution despite being miles better than anyone we’ve got in that particular position.

3. There was a shout for a penalty in the second half which the referee and linesman looked to have given. From replays it looked almost impossible to make a definite judgement so neither of the officials really knew what happened. Thankfully, they did what was best and decided against it. Although, I am inclined to believe if it touched anyone’s hand, it was Ji Dong-Won’s. As a result, the United fans began chanting “we’ll do what we want.” It’s not often we hear it sang appropriately, so I thought it was an ingenious gesture.

4. The Old Trafford faithful gave Wes Brown a brilliant reception. Just after the game kicked off I could hear “He’s big, he’s bad, he’s Wesley Brown, the hardest man in all the town, with orange hair beware, come and have a go if you dare.” We have always been respectful to players that served the club well.

5. Don’t think I could possibly finish this piece without mentioning the magnificent announcement that was made just before kick off. The North Stand has been renamed the “Sir Alex Ferguson Stand”, and the club have also promised a statue that will be placed by the entrance of the Sir Alex Ferguson Stand – hopefully erected by August 2012. For more information on the renamed stand announcement, click here.

2 responses to “Reaction to 1-0 win over Sunderland”