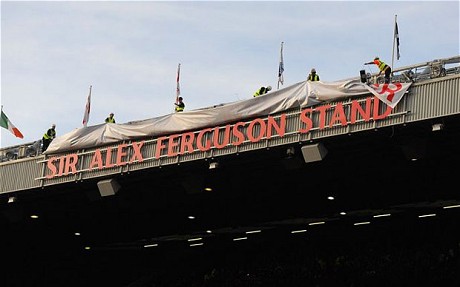 Before United took on Sunderland, Sir Alex Ferguson said an emotional speech thanking the Old Trafford faithful for all their support in the past 25 years. For everything he achieved at the club in all those years, Manchester United granted him the ultimate footballing honour, naming a stand in the ground after him.

As of 3pm on November 4, the North Stand at Old Trafford became known as the Sir Alex Ferguson stand. This stand, you mustn’t forget is the largest at Old Trafford and when watching from the top tier, you may require a set of binoculars.

What made it so special is that fact that neither Ferguson or any of the supporters knew about the announcement. Sir Alex first noticed after walking out of the tunnel through a guard of honour made up players from both teams and the officials referring the match. David Gill invited him to the centre of the pitch and asked him to turn around. He couldn’t believe it.

Ferguson said towards the crowd: “Thank you for giving me the opportunity to come here 25 years ago. We’ve given you some great moments, some of the greatest footballers this country has ever seen.”

This is certainly a moment that will never be forgotten in the club’s history.