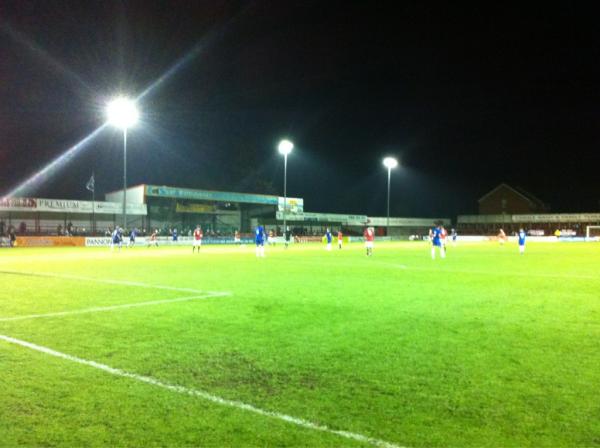 On another freezing cold night at Moss Lane, Manchester United’s Reserves faced an Everton side that was not short of experience or talented youngsters; former Wolves goalkeeper Marcus Hahnemann, re-signed Everton forward James McFadden and the very promising Ross Barkley all started for the Merseysiders, the United line up included places for Will Keane, Paul Pogba and even Zeki Fryers who after coming on as a late substitute in the champions league still managed to start for the Reserves. When the team sheets were given out, many were surprised to see teenage prodigy Ravel Morrison on the bench for United, his presence on the bench would be the talking point of the night after the game.

Despite Everton controlling possession for the first couple of minutes, United took the lead after Jesse Lingard went on a surging run from his own half and gave the ball to Will Keane who turned in the box and finished emphatically on his weaker left foot. The game was played at a high tempo with both sides passing the ball neatly around the pitch, the Evertonians were looking menacing from set pieces but United dealt well with them, and the blues only real first half chance fell to McFadden who blasted over from 15 yards out.

Just before half time, United piled on the pressure in a dominant phase, which saw Davide Petrucci shoot inches wide from distance and Jesse Lingard cause the Everton right back all sorts of trouble with pace and trickery on the wing. The whistle went for the break with United leading 1-0.
The second half saw Sean Mcginty come on for Zeki Fryers, who I wouldn’t be surprised to see involved on Saturday at Old Trafford against Sunderland. Everton began to take control of the second half, and went close on numerous occasions and if it wasn’t for the impressive Ben Amos, they would have levelled. With just under 20 minutes remaining, Everton rattled the bar and that would be their last chance to get something out of the game, United doubled their lead when Jesse Lingard scores a deserved goal after getting on the end of a cross and placing the ball past Hahnemann with ease, Mame Biram Diouf could have made it 3, but his shot was saved by the keeper. In the last 10 minutes the game lost energy and creativity, when Paul Pogba hobbled off after landing awkwardly, hopefully it was just a precaution.

The game ended with United claiming a 2-0 win over their scouse rivals, a good game of Reserve football and one that Everton would be annoyed not to have taken a point from, but the performance of Ben Amos kept the visitors at bay, however the big news would come after the game as Ravel Morrison, obviously disappointed with his lack of game time recently, seemingly expressed his anger and frustration over twitter, Ravel later tweeted that he did not mean the comments to be perpetrated in that way, but it is hard to see how they were not a direct reaction to the game.