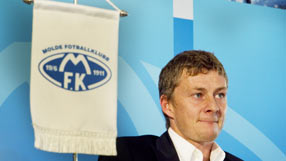 Expectations were high when Ole Gunnar Solskjær returned to Molde after a 15-year exile in Manchester – this time to take the manager’s reins. But very few dared even dream that Ole would land the title in his first season in charge.

Last season Molde finished 11th in a league of only 16 teams. With Ole in charge they’re cruising to their first ever title in the club’s 100-year history with two games to spare!

Not even Ole, who scored on his United debut, could’ve thought it would be this easy – especially after Molde where humiliated by newly-promoted Sarpsborg in the first game of the season. Not only were Molde rubbish last season, they also lost a couple of their highest-profile players in the close season. No experts in Norway fancied Molde to win the league and most tipped them to finish mid-table. The poor start to the season continued and many had written off Molde and Solskjær when they recorded their first win in round four, and then suffered a 5-0 defeat a few rounds subsequently.

However, the fairly young team were almost unstoppable mid-season, with nine consecutive wins. Despite securing only 4 points in heir last five games, the title was cliched when Rosenborg  lost 6-3 at home to Brann on Sunday night.

There’s no doubt Solskjær’s winning formula has been strongly infused by his United legacy. Molde have played the sort of the of football that would warn any red’s heart, and have been far more offensively minded than any of the other top teams. Their defence hasn’t really convinced anyone (ring a bell?), while they’re attacking play’s been fluid and blessed with quick link-up play, slick passing moves and players swapping positions. Former United player, Wolff Eikrem has certainly been the heartbeat of the teams attacking play, and has adjusted to senior football brilliantly. A fantastic passer of the ball, yet only five assists to his name.

Before we declare Solskjær divine, it should be emphasised that powerhouse Rosenborg have been well under par this season (and still Molde lost to them twice), and that other contenders like Vålerenga and Viking disappointed everyone. However, Solskjær inherited a squad with no real star players, and no prolific goals scorers. Even Wolff Eikrem hasn’t been among league’s very best players. So there’s little doubt Solskjær’s done a fantastic job at the club.