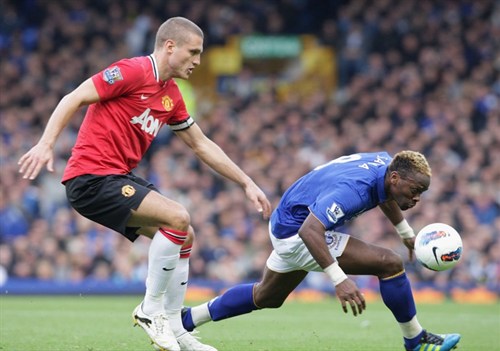 After conceding six goals against Manchester City last time out the thing United craved most, other than a win of course, was a clean sheet. Step forward Nemanja Vidic, United’s captain and leader pulled out a bruising centre half performance to haul United to a much needed victory.

Vidic’s importance to the United squad cannot be overplayed as his no nonsense style of defending has formed the bedrock of success at Old Trafford in recent years. Of course Rio Ferdinand can claim an equal share in acclaim when it comes to defensive ruthlessness however with Rio falling victim to the curse of injury a all too often now a days it is Vidic who is the main man of United’s back four.

On his return to first team action against Otelul Gelati two weeks ago the big Serb did look a bit ring rusty however it appears that ninety minutes against Aldershot in midweek has really brought Vidic on in terms of fitness and sharpness as he was peerless against Everton. He absorbed the physical challenge posed by the likes of Fellani and his old team-mate Saha and made one outstanding clearing header in the first half as he ran a good ten yards before leaping into the air above Bilyaetdinov and powered his header well into the Everton half. It was trademark Vidic and sent a defiant statement to the Everton attackers who struggled to get in behind the United defence for the rest of the game.

Vidic’s marshaling of the back four was also superb, although United can be pleased with the amount of young talented defenders they are bringing into the first team fray this season such as Jones, Smalling, Evans and the Da Silva there is no substitute for experience and Vidic, now thirty and approaching his peak showed this attribute in abundance at Goodison. The Vidic that United have now cuts an entirely different figure to the twenty-five year old lad who looked completely out of hi s depth on his debut in a 4-3 defeat to Blackburn Rovers in 2006. Since then Nemanja has adapted his game to the English style he speaks perfect English which now enables him to be a vocal presence in the back four which I believe is always a huge factor. I always remember being a bit concerned with Laurent Blanc in that although recognised his ability the fact that his English was limited made me worry a little, one thing you do not want in your back four is incohesion.

Thankfully United now have that with Vidic , Evra, Ferdinand and even Jones who, for a young lad is not afraid of citing his views. Keeping Vidic is of paramount importance as is keeping a steady back four although this is proving difficult at the moment with Ferdinand in and out of the team more often than a Jack in a box and niggling knock frequently rearing their ugly head with Chris Smalling becoming the latest to succumb to them as he faces a month on the sidelines with a fractured toe. Phil Jones and Jonny Evans have both had time on the sidelines and Rafael is yet to play this season, with Vidic though United always look a more mean defensive outfit. Without him even with the experience of Ferdinand they sometimes lack that ‘tough love’ style of leadership that Vidic provides, Rio gives a calming influence to his fellow defenders but often United need that snarling win hungry figure at the back as they have always had, just think Schmeichel, Bruce, Stam and of course Vidic.

Vidic was almost like a one man wall and repelled everything Everton had to offer, he was not alone though in pulling out an effective performance. I was impressed by our goalkeeper who has shown mental defiance that belies his age as he has overcome fierce criticism  to become a solid force on the last line of defence, Jones was again extremely unflustered in the face of an aerial bombardment and I also thought Jonny Evans did well after previously struggling at Goodison Park. In playing Vidic United are not only ensuring that they have a solid back four but the Serbian powerhouse will be inadvertently passing on all his knowledge to the likes of Smalling, Evans and Jones which can only bode well for bothe short term and the future. 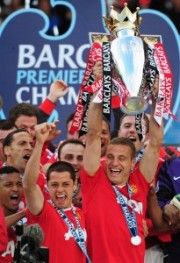