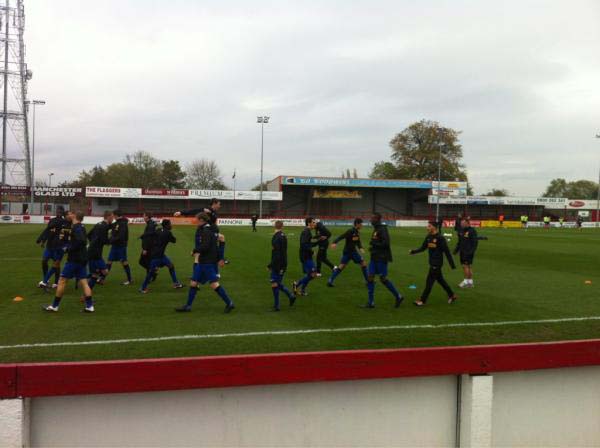 As Manchester United fans scrambled to find streaming websites to watch the first team against Everton, those who follow the Reserve team made their way to Moss Lane where United’s second string faced Blue Square North side Altrincham, who after being knocked out of FA Cup had agreed to play United in a friendly match. The game was a good opportunity for squad players to get valuable game time ahead of a gruelling campaign as the option for unlimited substitutions was available to both sides.
United handed starts to Jesse Lingard, Will Keane and Larnell Cole who did not feature against Aldershot earlier on in the week, and there was even a starting berth for Tomasz Kuszczak who has seemingly been in exile since his shaky performance on the day United claimed title number 19 last season. Paul Pogba, Ravel Morrison and Michael Keane all made the bench for United.

The game kicked off and inside 3 minutes, Altrincham had taken the lead, Jack Redshaw receiving the ball in the box and finishing clinically past Kuszczak. The next phase of the game was a scrappy one; neither side really controlling the game and Reece Brown was guilty of a few late challenges. With just under half an hour played, Altrincham scored a second goal, Redshaw again, prodding the ball past the goalkeeper after United lost possession.
United responded well, with Davide Petrucci going close from a long way out and then it was Petrucci who played in Jesse Lingard who proceeded to calmly round the keeper and stroked the ball home, half time arrived with Altrincham leading 2-1. During the half time break, the fans piled into the bar to see the climax of the match at Goodison Park, United hanging onto a vital 3 points against Everton.
The second half saw Warren Joyce ring the changes, and the first batch of substitutions saw Fornaiser, M Keane, Rafael Leao, Vermijl, Pogba and Morrison enter the fray. On 53 minutes, Ravel Morrison created and finished a fine goal, after starting the move; Morrison got the ball inside 8 yards and after faking 2 shots, slid the ball under Altrincham’s goalkeeper, yet more evidence of the bags and bags of talent this boy possesses. The introduction of Pogba and Morrison, combined with the impressive Petrucci saw United take the game by the scruff of the neck, in search of a winner to complete the comeback, United were denied what seemed a stonewall penalty, when Vermijl was hacked to the ground.
United piled forward, and Paul Pogba had a chance to win the game late on, but his shot was expertly saved onto the bar by the Altrincham keeper. The climax of the game was not a classic; both sides obviously tiring and the game petered out to a draw, an impressive comeback by the reds from 2-0 down.