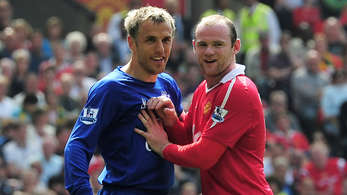 Manchester United will be traveling across to Merseyside on Saturday where they come up against Everton, who are currently sitting thirteenth in the league with 10 points from 8 games. Despite that average record, we all know how difficult it can be to walk away from Goodison Park with three points – we can’t take them for granted, in other words.

On the back of the humiliation last week, we are all crying out for a real response against Everton. I don’t want to go into it again, but maybe it was the kick in the teeth we needed. We aren’t invincible, and we all probably got ahead of ourselves after that outstanding second half in the Community Shield, a few months ago. I hope the young lads take it as experience – learning what dropping your head during a game does, so we can move on.

I’ve already mentioned Goodison Park being a difficult place to visit and take three points from. A lot of that is down to David Moyes’ management. He usually has his men up for the occasion, and like their neighbors they tend raise they game when we’re in town.

I don’t think I’ll go down too hard on the lads if the performance isn’t up to scratch on Saturday. That shows how desperate I am for the all important three points. If we had Wigan, Blackburn or Swansea I’d be much more relaxed about the game. You might not think it, but bouncing back from heavy defeats is bloody important. It’s all about mentality.

Last season when the lads were away to Everton they performed well but still managed to concede two late goals, and the game finished 3-3. The year before that, we lost 3-1 at Goodison. Now, do you see where I am going with this? Expect a tough noon kick off.

United will look to get the ball out wide and attack Everton’s full backs, most likely being Tony Hilbert. Ashley Young is doubtful so we will probably see Antonio Valencia starting on the right and Luis Nani on the left. At Old Trafford last season, Valencia outmuscled Baines, who is considered one of the best left backs in England. In recent games we had no choice but to bypass central midfield, however, with Tom Cleverley back fit there will be more options and hopefully more service for whoever is playing up front.

Our main weakness this season has been the amount of chances we’ve given away – currently 19 per game. The most in the league. You can either blame the midfield for the lack of support or you can pile the pressure on Evra who seems reluctant to come back after a few runs up the line. Another fault I have with Evra is his sleep pattern. It doesn’t seem like he gets enough at home, and falls asleep on the pitch costing us goals – both in the 8-2 win over Arsenal.

Who to look out for

Everton have a few stand out players, to be fair. Names that pop up frequently are Tim Cahill, Louis Saha, Jack Rodwell, Tim Howard and Leighton Baines. Moyes also seems to have an eye for the youth; this year he has given Ross Barkley a few runs, and the youngster has impressed enough to earn back page reports linking him with a move to us, Chelsea and City.

Manchester United to win 1-0, with Wayne Rooney scoring the only goal.