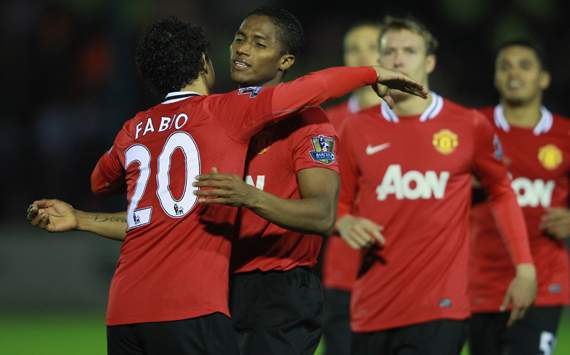 1. The performance tonight was predictable after the 6-1 loss to our biggest rivals, Manchester City. Even though Ferguson made 11 changes to the team that suffered the humiliation last weekend, there wasn’t many risks taken. Everybody seemed to do their job well on the pitch, with some quick attacking play on show.

2. Sir Alex Ferguson set out one of the most inexperienced benches the club has ever witnessed – de Gea, Vermijl, M.Keane, W.Keane, Pogba, Morrison and Cole. Before the game, the players who started as substitutes had only 13 first-team appearances between them (de Gea 10, Cole 1, Pogba 1, Morrison 1). The three that came on were; Paul Pogba, Ravel Morrison and Michael Keane. Pogba and Morrison impressed everybody showing lots of strength when in possession of the ball, and some silks (Rio’s word for silky skills) too. Keane, on the other hand, looked understandably nervous.

3. There was a milestone, if that’s what you want to call it, for Dimitar Berbatov tonight. The Bulgarian, who signed for the Reds in 2008, made his 100th appearance for the club. To make the night even more special, our number 9 scored a goal and assisted Michael Owen with his. He showed a good appetite on the pitch and certainly gave Ferguson something to think about when he picks the team from now on.

4. Another player that got his name on the score-sheet was Antonio Valenica, who’s goal came from a 25-yard screamer a few minutes after the second half kicked off. The goal aside, Tony V didn’t perform to what’s usually expected of him. He seemed reluctant to run at defenders and when it got to the point of crossing the ball, he rarely beat the first man. Maybe it’s just playing time he needs but on the wing, NOT at full back.

5. Ji-sung Park and Tom Cleverley sat in midfield and did a better job than Anderson and Darren Flecter have done in recent games. Saying that, it was Aldershot we were playing. A team some fans never heard of until we were drawn against them in late September – the 24th to be precise. However, it was still a good chance for Cleverley to gain some fitness. The sooner he’s back in the team, the better!

6. The Aldershot fans proved to be idiots as the game came to a close. When they seen their team being battered, they started signing chants like “Fergie, you’re a c*nt” and “part time supporters” towards the section of away fans. The funny thing is, their attendance for their last league game, against Barnet, was 2,341. That’s poor when their ground holds a little over 7,000.

The demanded victory puts Manchester United into the hat for the quarterfinal draw of the Carling Cup, which will be made Saturday 29th, October – live from Soccer Saturday, viewable on Sky Sports.