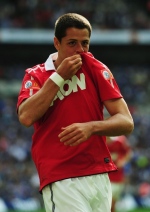 Manchester United officially announced today that Chicharito has signed a new five-year deal. His agent confirmed two weeks ago that the player and club had agreed a contract-extension, so we had an idea that it was going to happen sooner rather than later.

United were first made aware of Javier Hernandez in December 2009 when a scout came back from duty in Mexico, after seeing him score a few goals for Chivas de Guadalajara. Just over a year later, Hernandez put pen to paper in a deal believed to be in the region of £8million. Some will tell you, a star was born that day.

His first season in England surprised everybody, including Sir Alex Ferguson. He adapted to the English game surprisingly quick, becoming the first player since Ruud van Nistelrooy (2001–02 season) to score 20 goals for the club in his debut season. He currently has 23 goals in 55 appearances.

Hernandez hasn’t got many starts so far this season, but I’ve no doubt that he will get some soon. He’s unlucky in a way, though. Danny Welbeck seems to score whenever he’s played and hasn’t given Ferguson a reason to drop him from the team. Chicharito, however, is the type of player that sees the team as being the priority, and the manager I’m sure, respects that. His talent for creating space in the box is incredible – the equaliser against Liverpool last week is a clear example of that.

“Playing for Manchester United has been a dream come true for me,” he said. “I never expected my first year to go so well and I’m delighted to commit my future to United. To win a title and appear in a Champions League final was fantastic. I’m looking forward to helping my teammates as we bid to win more trophies for this great club.”