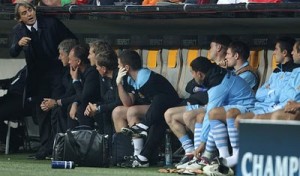 This week Danny Pugsley answered a few questions ahead of the Manchester derby. Danny is one of the editors from SB Nation’s Manchester City blog ‘Bitter and Blue’. He has also written a book called ‘Man City 365’.

Explain in detail what this fixture means to you?

For me personally, because I no longer live and work in Manchester, I’m more detached from it and there feels less of a build-up in terms of the tension building throughout the week where the chat about the game grows through to the Friday when you’d barely do anything else apart from discuss, think and worry about the impending game (usually with an ever-increasing sense of doom). That said, emotions during the game never change (and likely never will) and it is a game that will always be set apart from any other for both sets of fans.

I did feel that around the mid 2000’s, when City were stagnating under Stuart Pearce and financial constraints the club faced, it felt that the derby lost some of its bite. Undoubtedly though, events over the past couple of years have changed the dynamic of the game. Not only is there bragging rights at stake but the result will have a very real influence on the title race (heightened by the fact both sides have started in such good form). This in turn does seem to have brought a real edge back to the game, which for many is what derbies should be all about.

Not a surprise I guess by naming the 5-1 as the greatest. It was the first home derby I’d been to and heading into the game even avoiding a hammering would have been a positive so to then go on to win 5-1 was staggering given it was so unexpected. I’ve obviously seen more derby wins since then but none have come close to the feelings around that one. The worst? The 5-0 was just ridiculous but I wasn’t at that game so the 3-2 home defeat (when City chucked away a 2-0 half time lead) left the most deflating feeling and when City gifted United an early second half goal there was an overriding sense of inevitably around what was about to unfold before your eyes.

There’s been a lot of news surrounding Carlos Tevez recently. How did you react when he stood Roberto Mancini up by refusing to come on as a substitute against Bayern Munich?

It’s a strange one with Tevez now as rather than uniting in uproar against Tevez in slighting Mancini and the club, fans (I know I certainly do) have grown tired of events around him and to be honest are passed caring to the extent where if he sloped back off to Argentina tomorrow would anyone really be bothered? It’s a shame as for two seasons he was unquestionably such a driving force and the heart of the side that won the FA Cup and got into the Champions League but the summer additions showed the club were moving on and I’ve written on a few occasions this season that (and this before the incident in Munich) I just don’t see how fits into the current formation and style Mancini is adopting.

Do you think Tevez’ antics pass a bad message around the dressing room and cause discomfort? If so, would you prefer to see him leave for another club?

I’d imagine the players are as equally tired as everyone else. I can’t speak for what happens in the inner sanctum of the dressing room but based upon what we see on the pitch the players don’t appear to have been affected by it. Don’t forget, Tevez has plenty of form in terms of butting heads with Mancini (albeit not to this level) so whilst a shock, it may not have been totally surprising. Where there may well be an issue is dependent on the outcome of the investigation. If it results in a situation where Tevez is brought back into the fold then the balance and mentality of the squad could certainly be disturbed.

I’ve watched Sergio Aguero the last few years and said many times that he has the talent it to make it here, in England. Your first impressions on the new Argentinean?

Very impressed. For a player so young, coming to a new league and adapting to a new country I was minded to think that there would be a period where he would be brought along slowly and eased into the side. He has played pretty much from the word go and really hit the ground running. Although quite a squat figure, he has a tenacity to his play and the physicality of the Premier League doesn’t faze him. What is most noticeable though is just how clinical a finisher he is; such a clean striker of the ball with either foot. Early days of course but he is a player who could really dominate the Premier League for years to come.

There’s plenty of City fans getting mouthy and over excited about sitting on top after just 3 months of league football. And looking at your results, I noticed that there hasn’t been many tough fixtures. Do you worry about playing the bigger teams like United and Chelsea?

If we are being honest how many really tough fixtures will there be this season for the likes of City, United and Chelsea? City and United have only dropped two and four points respectively and rather than this being a surprise, perhaps this is an indication of how the season will play out. With the way both City and United strengthened in the summer they look well ahead of the overwhelming majority of sides in the Premier League.

City certainly shouldn’t worry about playing the likes of United and Chelsea. Why should they? Their results the past few seasons against them stand up and where I thought City may struggle was with putting together the consistent runs United and Chelsea have habitually showed; so far, so good in that respect though.

Which United player will you fear most on Sunday, and which will you be looking to take advantage of?

Wayne Rooney is an obvious threat and Vincent Kompany will need to be at the top of his game but it could well be Nani who can cause most problems. Speaking to United fans he has really elevated his game and being able to run at the defence (much like Cristiano Ronaldo) at pace is such an asset to have. I’m interested to see the impact Javier Hernandez has as games against City aside I haven’t seen much of him but he hasn’t had much impact against City yet is fast carving out a big reputation.

United have conceded a lot of chances this season and the numbers show that City have been fairly proficient in the final third so this will be an area they will look to take advantage of, particularly with United less than settled (due to injuries) in this area. A lot here will be depend on City being able to control the midfield area though.

Can you explain all the empty seats at the Etihad Stadium? Manchester is red.

Given that I no longer live in Manchester and miss more games than I go to  perhaps I’m not best qualified to answer this but there are some misconceptions around this issue. Take this season, all four Premier League games have sold out and the two Champions League games were around 1,000 or so short of capacity. The one game that wasn’t sold out was the Birmingham Carling Cup game which featuring two reserve sides I don’t blame anyone for not attending.

If you look at City’s Premier League attendances the past couple of seasons they are at about 95% capacity in terms of average attendance (amongst the highest in the Premier League). Where they have struggled is in Cup games the past couple of seasons is where it seems that a high number of season ticket holders (for whatever reason – TV? Cost? Practicality?) aren’t going (don’t forget there is no compulsory scheme in operation), which led to crowds of around 15-20,000 below capacity, which, now they are in the Champions League, will very much be the exception I’d imagine.

To me, the whole Manchester is Blue/Red ‘debate’ all gets somewhat childish (just check the respective hashtags on twitter) and it surprises me how much energy fans (of both sides) waste on it when there are far greater issues around.

A surefire prediction is that if there is a result then the reaction to it will be over-analysed and over-hyped to the nth degree given the sides go into the game 1st and 2nd in the table and talk of title credentials and laying down markers will be used ad nauseum.

I would like to thank Danny for his time.