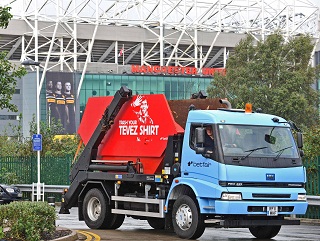 With the Manchester derby just around the corner, United and City fans are being encouraged to come together and dump their Carlos Tevez shirts.

The world’s largest Internet betting exchange, Betfair, have been out on the streets of Manchester offering fans the chance to get rid of their jerseys in an anti-Tevez skip, which will be driving around the Old Trafford area from 10am Sunday morning until kick off.

This act hasn’t been set up in favor of any of the two clubs involved. The people of Manchester are sick to death of hearing the money grabbing Argentine complain about the city. You couldn’t trust him as far as you’d throw him, a quote that suits Tevez perfectly.

They are expecting over 75,000 fans to attend the match on Sunday, so bring your old Tevez shirt to the skip if you haven’t burned them already. Betfair will be sending all the unwanted jerseys to Argentina, where they will be given to a number of local charities full of people that will appreciate them more than some in Manchester.

Alex Blake from Betfair said: “Time and time again Tevez has let the fans down. What better way for fed up supporters to show they want rid of him for good than by dumping their shirts?

“These two sets of supporters don’t often see eye to eye, but I’m sure they’ll all be pleased if he leaves Manchester in the January transfer window.”

Here’s a video that contains reactions from the people of Manchester.