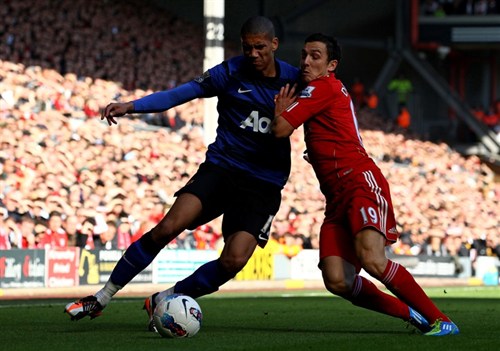 On the face of it a draw may have not been exactly what we had been hoping before prior to kick off on Saturday at 12.45. It has been almost four years since we registered a win at the home of our greatest foe and that is something that doesn’t sit well with the United faithful however Javier Hernandez’s late equaliser which only goes to boost his reckoning in and around the club could well prove to be an extremely valuable point come the end of the season.

On a personal note I felt the 1-1 draw at Anfield was a good result, it may not have been pretty at times but when you consider our recent record there and what stage it is in the season all is far from lost. The result did go to prove that the inner resilience that provided a large chunk of influence in the winning of the illustrious nineteenth league title last May is still very much present. Some worried earlier in the season that despite the newly found devastating attacking gusto that United used to maul their opposition the Reds may come unstuck when the opposition stops us from playing and the side have to dig deep, a trait that is arguably even more important than playing silky, flowing, attacking football, just ask Arsenal.

In recent weeks any lingering doubts over such matters have been iradicated as United have had to dip into their reserves in order to get a result, against Stoke, against Basle, against Norwich and now against Liverpool. The Reds have been far from their peak but have shown enough inventiveness and experience on the ball to make the crucial interjection. Although I thought Liverpool played well on Saturday and it is clear they possess some extremely talented individuals in their ranks such as Suarez and Gerrard they do not yet strike me as a championship candidates (and by that I mean league winners not Division 1 potentials for you jokers out there!). Mid-way through the second half they did appear to be the more likely to break the dead-lock however they were not breaking through the last line of the defence, United were admittedly offering little themselves but for a home team I did not think Liverpool were doing enough with Ferdinand and Evans marshaling their forward line well.

I’m sure the debates will go on as to whether Liverpool’s goal was actually a free kick in the first place, there was minimal contact and it is understandable that Ferdinand would feel aggrieved by the decision by Andre Marriner to award a free kick in such a dangerous area particularly when Liverpool possess the set-piece prowess of Suarez, Adam, Gerrard and Downing. For me though by the letter of the law the referee got it right, minimal contact, undoubtedly so, enough to make Adam go down, absolutely not but at the end of the day there was contact and the player went down, free kick, unjust but that’s modern day football. One thing that annoys me most in the world is fans of other teams inferring United have the support of the officials and I had a few ‘chats’ with some Chelsea fans after the recent 3-1 win at Old Trafford who whilst criticising the ‘two offsides’ conviniantly forgot about the amount of times Martin Atkinson has made decisions in their favour in the recent past. As much as this annoys me United fans are guilty of it too, my twitter feed was littered with the words ‘scouse’, ‘dive’, ‘cheats’ in the immediate aftermath of the game and you can see where they are coming from but look at this way, Ferdinand’s foul on Adam was more of a foul than Daniel Agger’s on Dimitar Berbatov was, a foul which resulted in a successfully converted penalty. You win some you lose some in football and I can’t abide all this ‘if we’d have had an impartial’ referee nonsense.

Right, rant over, lets focus on the football, the interesting bit. As I have already said United were far from their fluent best but were set up well enough to stifle Liverpool and earn a point. Ferguson set his team up to aim for a smash and grab victory, he opted to play Phil Jones in the centre of midfield with Darren Fletcher giving the nineteen year old the job of marshaling the forward runs of Charlie Adam. He deployed the effervescent Ryan Giggs just behind Danny Welbeck and utilised Park’s work ethic on the left of midfield, this was beyond doubt a team that was arranged not to pummel the opposition with endless waves of attack but to absorb and stifle, quieten the crowd and hopefully snatch a goal on the break.

The first three United did effectively however they offered little in the final third, Welbeck despite a valiant effort struggled up front as he became isolated with Young or Park able to get in to position to really assist the young Englishman. Credit must go to Liverpool’s defence for this as although I’m not a huge Carragher fan I thought he did well and I recognise he is a talented player albeit slightly over rated in my opinion. United may have been better served playing a more experienced forward up top as they may well have made a better fist at holding the ball up, however I am sure that the experience will have done Welbeck a world of good and his influence increased with the introduction of Hernandez it was Welbeck’s flick on that set up the predator like Mexican to head home a crucial finish. Perhaps United’s line-up was compromised by the fact that a large portion of their players had just return from long distance international forays and in Rooney’s case a tough week for a a different reason entirely however we should applaud how effectively United performed in defence. Gone were the lapses of concentration that we have seen a little too regularly in recent weeks and this was replaced by a stronger sense of cohesion within the defensive ranks. David De Gea did not put a foot wrong after making a number of crucial interventions including a late save from Dirk Kuyt, under fire Rio Ferdinand also made a confident return to the back four and expertly marshaled his relatively inexperienced compatriots (excluding Evra). Deploying the extra midfield probably helped with this but the likes of Luis Suarez, Steven Gerrard and Charlie Adam on their own patch would surely count as some of the attackers that United have had to play this season. United were unlucky in that just as it appeared they had stifled an early second half resurgence they scored from a set-piece, Gerrard dispatched and then ran off kissing the badge in front of the faithful, as disheartening as this was to see at least there wasn’t a camera in the vicinity to get his grubby mitts all over!

The goal bore huge similarities to last season at Old Trafford where Dimitar Berbatov won the game with an unforgettable hat-trick. Before the Bulgarian’s winner Gerrard had made the scores 2-2 from a free kick in which Darren Fletcher broke away from the wall leaving a gap for the Liverpool captain’s shot to arrow through, on Saturday it was the turn of Giggs to be the fall guy whom despite an excellent all round performance inexplicably moved out of the wall to attempt to block the shot but in doing so opened up a perfect gap for another goal against United for Gerrard.

United made instant changes, changes which some may say should have come earlier but I could see why they didn’t. With Liverpool not looking like scoring Ferguson was trying to hold out for as long as he could with the 4-3-3/4-5-1 formation to see if they could snatch the illusive opening goal. With that goal obviously not forthcoming Ferguson readied Nani and Rooney only for Liverpool then to do what Ferguson wanted his side to do, score first.

With the ever popular Rooney and Nani introduced to their adoring Merseyside faithful things began to open up and United offered much more vigour in attack. Liverpool suddenly looked worried and on the back foot, throw in to that equation a certain Mexican striker and the game truly opened up with a brief spell of end to end action with United just about controlling proceedings. This control paid the ultimate dividends after a succession of corners Danny Welbeck flicked on a Nani corner for Hernandez to bound in, shrug of the unconvincing Skrtel and head home the equaliser, he then set off on his customary lightning paced goal celebration toward the United faithful. With their tails up United searched for a winner which unfortunately never came, Liverpool also kept going an in the end it was they who looked the more likely winners with the aforementioned Kuyt missing a decent opportunity after a sumptuous cross from Downing and then Jordan Henderson could only head over as the Kop screamed for more.

Hernandez’s late goal was certainly sweet, it would have been somewhat sweeter had it been the winner however considering our recent record at Anfield and our recent defensive frailties this result definitely goes into the category of ‘good point’ although it’s probably not the ‘United way’ to be overly-happy with a draw the sight of Hernandez charging toward the United travelling fans, mouth and eyes wide open clenching his fist would bring a smile to the face of the most ardent of pessimists.

8 responses to “United battle to valiant point at Anfield”