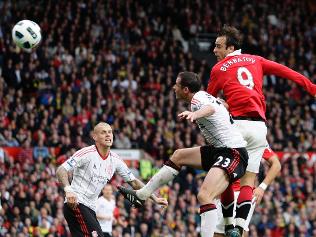 I’ve invited Antoine from Empire of the Kop to answer a few questions ahead of the game this weekend. Read our answers to his questions here.

Liverpool have started the season better than expected. Apart from being a big figure within the club, what has Kenny Dalglish brought that Roy Hodgson couldn’t?

Kenny has brought back football to Liverpool, we are playing entertaining footie again. It is all about passing and moving and not the hoof-ball that Roy Hodgson is famous for.

In Liverpool’s last league fixture, against Everton, you lot had some controversial decisions go your way courtesy of Martin Atkinson, who seems to have bonded well with Luis Suarez for some strange reason. Can you see Liverpool beating our current squad without any foolish decisions?

Andy Carroll has surely raised eyebrows over at Merseyside. He cost £35million and has scored just three goals. When will he officially become one of Liverpool’s biggest embarrassments?

First of all Andy Carroll really cost us a negative £15 million. He came in to replace Fernando Torres, who we sold for £50 million. As of today, Carroll has scored one more goal than Torres did and of course you need to also consider that Carroll’s salary is 1/3 that of Torres. Yes the number of goals haven’t been enough but I am sure he will step up and score more soon. Let us not forget the contribution he is starting to make to the team.

Where do you see United’s weak link? In other words, where will Kenny try to take advantage of position wise?

David de Gea, so you will likely see more shots from outside the penalty area. Maybe a Stevie G. special? 🙂

Did you feel let down when Ashley Young chose United over Liverpool? It’s also thought Dalglish ended up signing Stuart Downing after looking at a number of preferred options beforehand.

If you ask Kenny about Young he will probably pull a quote from Shankly “I just wanted him for the reserves” 🙂
Regardless Downing is a great signing and he has been great so far for L.F.C.

Tell us how you felt when watching us lift number 19 last season?

Honest answer “I didn’t watch it” however I was happy that at least Liverpool had turned things around from the disastrous start of the season as we could have been fighting for relegation.

Have you anything to say to those people that go to these games and sing vile chants?

I think they are disgusting and they must stop, both clubs should work together and start banning fans who mock tragedies such as Munich, Heysel and Hillsborough.

How do you predict the game will finish?

18 responses to “A view from the enemy: Liverpool fan on Dalglish, vile chants and the £35m flop”