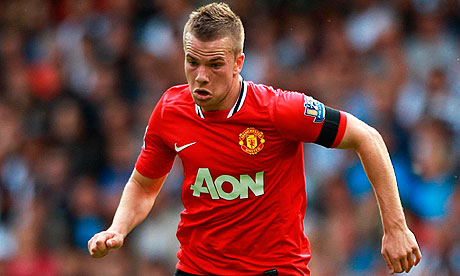 Tom Cleverley signed a four-year deal with Manchester United on Monday, keeping hold of the brilliant midfielder until the summer of 2015. Not only did the academy graduate extend his stay at the world’s greatest club, but he’s also been rewarded with a huge pay rise.

In Scholes’ absence, Cleverley is competing with Anderson, Darren Fletcher and Michael Carrick for one of those roles in midfield. And from reading reactions since his injury, there’s no doubt who the fans prefer.

“Tom is one of the brightest prospects in the English game,” Sir Alex said. “For a young boy, he has a good footballing brain which, when coupled with his energy and ability, makes for a player with a fine future ahead of him.

“It’s the United way to encourage our young players to make their mark in the first team and Tom has grabbed that chance with both hands.”

Cleverley said: “It’s been a fantastic start to the season for me, breaking into the first team and getting an England call-up. Having grown up at the club, I’d love to be able to make a contribution to United winning more trophies.

“We have a squad with great ability and I can’t wait to get started again.”

Image from the Guardian