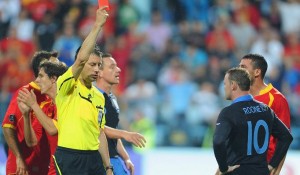 Dear oh dear… I think we all felt angry and annoyed last Friday as England played Montenegro. Wayne lost the ball, went to fight for it back, and then decided he’d had enough so took a swipe at the defender’s leg. He went down like a sack of spuds, and Wayne walked off before the red card had even been shown. Those dark clouds appeared over his head again.

I was sat in a bar shouting at a telly, alongside a City fan, who was just as loud as I was. I was angry at his choice, and so was any England fan – we could all see that there was no need, and now he’s out for at least the first game of Euro 2012. A stupid, mindless action that could have great consequences.

It made me think back to the old Wayne – the hothead who was naive, stupid, and his anger always got the better of him. The Wayne that would lose the ball, run 60 yards and lunge with both feet into some poor bloke’s shin. The Wayne that would unnecessarily raise his hands at another player to make sure he always came out on top. The immature, pre-Fergie Wayne.

He then calmed down, became a lot more mellow, and played better football for it. And I haven’t seen Wayne lose it since around 2006 till last Friday. And it’s a worrying thing to see – will he still be angry come this weekend’s monster clash with Liverpool? Or will he have calmed down?

Let’s just hope he’s had a long think before he returns to OT.