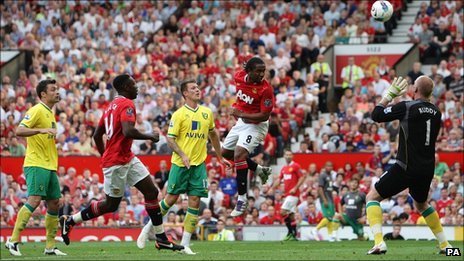 This weekend saw my first league game of the season, against Norwich. The four hour journey up on the supporter’s coach in the brilliant sunshine made for a great atmosphere upon arrival at Old Trafford, but what we saw during the 90 minutes was a very lacklustre United, with something completely missing.

We blamed no Rooney for our poor display against Basel, but I’d go as far as saying that the weekend’s game was in fact worse than our midweek performance. We’re not a one-man team, and Wayne doesn’t make such a difference to our team that he turns us into world beaters, but he sure does put in a shift that all the other players don’t.

It says a lot when our best player at the weekend was a defender – Phil Jones put in an absolutely sterling performance, and his tackle in the second half having slipped and chased back Steve Morison before scissoring the ball and smashing the ball away before he pulled the trigger. Sublime.

But it shouldn’t have been anything like that. Again, Anderson let the whole team down, and it is becoming more and more obvious that he is the weak link. He may have scored our first goal, but he just didn’t play well enough. He smashes the ball too far in front of his feet, and tries to chase the ball, but it inevitably ends up at the feet of the opposition, leaving us another ball to try and win back. Despite all his faults, Tevez used to do something very similar, but he would always chase the ball back and win it for the sake of pride. Ando doesn’t do anything like that, and just stands and watches. Take him out the equation, and put a more experienced, more skilled midfielder in his place, and suddenly we’re a different team. Look how well we played with Tom Cleverley in that spot…

I was also hugely disappointed with Nani. Now, as many of you will know, I’m now exactly his greatest fan – I believe he’s very selfish on the ball, never looks to pass if a shooting opportunity is there, and goes down far too easily. And I admit, these are traits of the early Ronaldo. But does that make it okay to do it?

His crossing is second to none in our squad, and the whip and curl he can get on the ball is incredible. His passing is also pinpoint, providing he chooses to pass it in the first place, mind you… But this weekend, he didn’t seem to do a lot. We needed to exploit the wings, because Norwich were playing very tight, but at every opportunity we had to go forward, he’d run it just that little bit too far and we’d be stuck in the corners with three yellow shirts surrounding us. It all became a little routine, which as we all know is certainly not the United way.

Got to say though, Park had another cracker – he truly is a great player to have in the squad. He chased every ball, he wanted to get the ball forward, and he worked well with the overlap of Evra. He worked tirelessly on Saturday afternoon, and it really was great to see.

But, as every fan who was at the game will tell you, Giggsy is just in another world. He completely changed the game on Saturday. Before he came on, we actually looked a little out of our depth, and a bit sheepish to try and attack, but when Giggsy arrived, we passed the ball quicker, we played it forward at a much more alarming pace, and we started to run rings around their defence. Funny how Giggsy came on and we scored both goals…

All in all, I was very disappointed in the first hour of the game – we lacked experience or any prowess to actually try and win the game. In all fairness to Norwich, they were a unit, and came at us whenever they could. They closed down very quickly, they attacked well, and they were certainly deserved to take more than a 2-0 loss. They’ll do alright this season.

But we have to shake things up, and hope the international break does us some good. There is a lack of presence in midfield, which as one season ticket holder next to me said, we ‘hadn’t seen since just before Veron arrived’, which is quite true when you think about it. There’s no Keane like figure, or a Scholesy type player to get the ball spread around, and then win it back when we need to. That’s our downfall at the minute.

Will we make a signing in January? Fergie always tries to avoid it, but it really wouldn’t surprise me. Someone like Schweinsteiger would really put us back at the top of the game, but I doubt he’ll sign any big name, purely so the squad stays settled. The Sneijder rumours have already begun, too. But any signing we’ll make won’t necessarily strengthen the squad, but add more depth to it. And that’s just what we seemingly need at this moment in time.

And I really hope I have to eat all 857 of my words come Christmas.

Agree with me? Something else to add? Follow me on Twitter – I’m @Adam9309. Or get in touch via the official site feed, @StrettyNews!