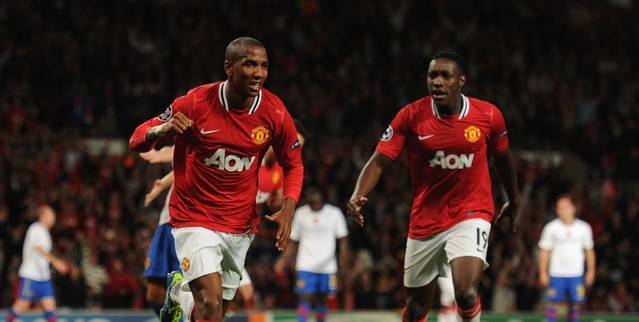 1. United played with an over-relaxed attitude, taking 10 minutes to actually wake up. For a short period of time, we switched the ball brilliantly from side to side, across the pitch. The Swiss champions couldn’t keep up with our movement, therefore, we punished them by scoring two goals in the same space of time. When that short period came to an end, Basel (pronounced Basil, according to Gary Neville) started creating a number of convincing chances. FCB took advantage of our poor defensive display and were a goal ahead in the last 10 minutes. They deserved nothing less.

2. Danny Welbeck got his first start since picking up a hamstring injury in the 8-2 victory over Arsenal. He played up front alone. The England international showed signs of class, especially when scoring two goals in quick succession. Welbeck gave the team something Berbatov and Owen couldn’t last week, and that’s pace.

3. Our back-four were shockingly poor tonight. Phil Jones looked good on the ball, but when it came to defending he was all over the place. Rio Ferdinand showed his age, 32, with the lack of pace which benefited Basel’s attacking threat. Fabio picked up an injury, but that doesn’t hide how poor he was. Evra, on the other hand, produced another below average performance. He was caught dreaming when Basel scored their second. We need Vidic back as soon as possible.

4. I’ve complained about how bad our defense was, so I should probably mention David de Gea. The young Spaniard pulled off some brilliant saves, after being left exposed time and again. He showed pure class and deserved a clean sheet. Those who doubted him must be itching themselves.

5. Ashley Young made his Champions League debut. He also scored the all important equalizer, just after additional time was called. However, Young has plenty of room for improvement. He was ineffective throughout the game. That didn’t help Welbeck, who we already said was up front alone.

6. Anderson, who simply doesn’t work well when played beside Darren Fletcher, performed a lot better than last weekend. Although, he needs to learn to give the simple ball every now and again. Ando tends to make football more complicated than it actually is. Michael Carrick, Anderson’s partner in midfield, successfully completed 76 passes out of 78. Some say stats don’t cover the overall performance of a player, but he didn’t do a whole lot wrong in my opinion. Got forward a lot more than usual.

2 responses to “Reaction to draw with FC Basel”