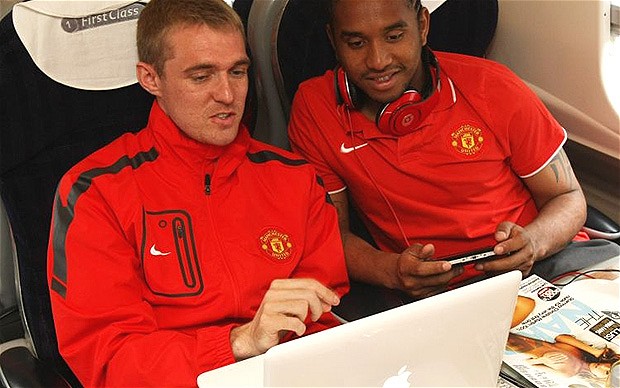 The electrifying start made by Manchester United this season has been down to many things; the form of the unstoppable Wayne Rooney, the creativity of Nani and Ashley Young, the stubbornness of our second string back four, however I believe the job our two central midfielders have done has been essential to our early season success.

With the retirement of club legend Paul Scholes in May, lead many to expect Sir Alex to dip into the transfer market for a central midfielder, several players were linked but United stood firm and didn’t sign anyone in that particular position. Tom Cleverley returned from his loan spell at Wigan and after an impressive cameo in the Community Shield, Ferguson started him and Anderson at West Brom in the season opener, United got the win, albeit a scrappy one, but many saw the two as a potential first choice partnership. Cleverley and Anderson retained their starting berths against Tottenham, Anderson scoring a brilliant goal and Cleverley gaining an assist.

Arsenal were next, Cleverley and Anderson started again, United mauling the Gunners 8-2, again the pair again shone. Unfortunately, during the 5-0 demolition of Bolton, Cleverley suffered ligament damage in his foot inside the opening 5 minutes; Michael Carrick took over and was equally as efficient as Cleverley had been in previous games.

The way Anderson plays often coincides with whom he is partnered with in midfield. It is no surprise that he has been in good form when aligned with Tom Cleverley in the middle of the park, the way the pair play, is that they work together to press, pass and pick off opposition midfielders, the energy the pair possess is vital in the way they play.

Since Cleverley got injured at the Reebok, Anderson has been poor; he gave the ball away unnecessarily and was generally sloppy in possession against Chelsea, that day he was partnered with Darren Fletcher, who making only his second start since March, passed the ball very well.

However, both players never seemed to press forward enough and were often caught playing far too deep, which resulted in Rooney dropping deep to try and find some possession. The chalkboard below shows how deep Darren Fletcher played against Chelsea, completing almost all his passes inside the United half, a poor stat for someone who is considered a box-to-box midfielder.

Anderson would tell you that he is primarily an attacking midfielder; however he has been poor there on many occasions when given the chance, he is now deployed in a more orthodox central midfield role, and when Cleverley, who happens to play in that role as well, partners him, the pair shine.Anderson and Fletcher were again chosen to run United’s midfield at the week-end against Stoke City. Anderson was again very lacklustre, sitting back and not relishing in the role like he did when he was alongside Cleverley. Fletcher played identically to how he did against Chelsea; predominantly back inside the United half and occasionally going forward like his old self. Although Fletcher’s passing statistics were impressive, completing 54/61 passes, United lacked presence in the middle of the park, a huge contrast to the domination that had taken place against Spurs and Arsenal. The chalkboard below shows the inconsistency of Anderson’s passing against Stoke, often attempting unnecessary Hollywood passes across the pitch.

The youth and energy that Cleverley brings to the side seems to spur on Anderson, in the games with Fletcher he seems to be much more static and complacent, the same can be said about Darren Fletcher, although I think his form is much to do with fact he hasn’t played regularly since March before he was struck down with a virus that ruled him out till September. The performance of the two in recent games will be more ammunition for those who wanted Wesley Sneijder in the summer, those who say our midfield lacks class. I disagree totally; I believe our midfield can be dominant, as shown in our first few games. However I think Sir Alex Ferguson needs to avoid pairing Fletcher and Anderson together as it seems that the two cannot excel when in central midfield. I’m sure Tom Cleverley will come straight back into the team when fit, which will probably mean Fletcher to be sacrificed.

I have full faith in Sir Alex Ferguson, and in Anderson and Darren Fletcher, they are both fantastic players, otherwise they wouldn’t be at our club, however I do not think the players’ attributes compliment each other, and rather than enhance our performance, they seem to decrease our fluency and ability to dominate in the midfield. Taken all this into account, it is no surprise Sir Alex is desperate to have Tom Cleverley back, fit and firing on all cylinders.