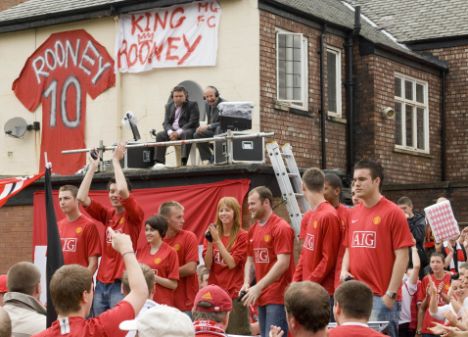 ‘All Hail Rooney.’ Is it time for the Manchester United faithful to throw down the status of republic, and to accept a new king?

At the close of the 1997 season, the English Premier League lost one of its greatest servants, the man who had lifted five titles in six seasons with Manchester United, Eric Cantona, or should I say ‘King Cantona’? This exit from football, thankfully, came almost two years later than feared at one point in his career, this following a ‘kung-fu’ kick that he has more recently described as his ‘greatest moment in football’. Since ’97 the league has moved on and found new icons, hero’s and, as Cantona was on occasion, villains. But Manchester United have never again found anyone so idolised by the fans, such a leader to the players, or so important to the team, despite the mass of super-stars grown from the field at the Theatre. Yet with the progress, and transition, of one man over the past few seasons, have the Stretford End faithful found their new king, idol and leader in the shape of Wayne Rooney, or will he go down again as just another outstanding Old Trafford favourite?

I, along with many others, would never have imagined that less than twelve months after Rooney’s most bizarre of outbursts against the ambition of the club, would the hopes and dreams of the United fans fall so strongly on those shoulders again. Yet still, with a blistering start to the season, and eight goals to his name (including two hat-trick’s) in the first four games, we find a new man, who has adopted the greatest aspects we’ve ever imagined out of such a young player. Yet, on a different scale, such an outburst resembled the fears the fans suffered around the time of Cantona’s ban. For Sir Alex Ferguson to still place his alliance and trust in a player, where he would normally throw any ordinary super-star out on his arse for breaking such trust, again resembles a ‘Cantona moment’, even the favoured Roy Keane didn’t survive such criticisms of the club.

Rooney’s second comparison to the likes of Cantona comes from his new, yet always intended, style of football. A style that sees him controlling the game, more than ever, strolling through the pitch with an ease and understanding of how simple football can be, and enjoying what is going on around him. Over the summer, following an ongoing transfer saga involving a pre-made superstar in Wesley Sneijder, however, Cantona compared the Dutchman to himself, in his style of play, build and character. Though, maybe, the ‘king’ has missed his more obvious successor, a player already at home in the Theatre, already loved by the fans, just waiting in a queue to become an idol.

Is it that Ferguson too, see’s far more importance of Wayne Rooney in football, far beyond that of pure talent though? Perhaps, as he did with ‘King Cantona’ back in the 90’s, needing his resolve, and abilities to guide a young squad through their first real tests in football, a role that gave the Frenchman such a title. As we see the new United step forward to be counted, following the departure of no less than six experienced players, it seems to me that Fergusons grand plan comes into place, with Wayne Rooney at the helm. To the squad he is invaluable, but it is now time for the OT faithful to place more than just trust in the boy wonder, and to begin to idolise him as they have done to so few in such a successful history.

By Chris Hames, the latest contributor to Stretty News.

2 responses to “All Hail Rooney – Is it about time?”