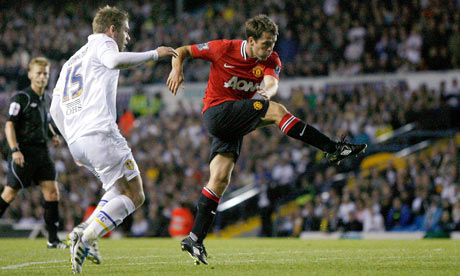 Okay I know what you are thinking, how could anybody ‘deserve better’ than Manchester United? Well that’s not quite what I mean but with yet another confident goalscoring performance from Michael Owen in the League Cup victory over Leeds are we devaluing one of the greatest English forwards ever?

Now admittedly the opposition was a poor Leeds outfit, but the way an extremely young and inexperienced United dismantled what is a decent Championship side (oh how fun that is to say) was very impressive and despite the obvious youthful presence in the side it was two old stagers who impressed me, Ryan Giggs and Michael Owen.

Now don’t get me wrong players in the calibre of Owen and Giggs would be expected to shine against an average Leeds side and I’m sure that Giggs would have found it profusely more difficult to breeze past Leeds defenders of yester-year such as Ian Harte and Lucas Radebe as he did prior to United’s third goal, however the fact that Owen and Giggs ran the show without even breaking a sweat was very pleasing and in terms of Owen proves to any doubters that once you have it you never lose it.

Owen looked very sharp, constantly inter-changing with Berbatov in terms of dropping short and then leading the line, his second goal was a masterful finish and in Owen’s word as ‘sweet as I hit them’. It was clear that even within the first ten minutes that despite doubts over the team seleection from some quarters United and Owen were well in the mood. The Leeds back four simply couldn’t deal with the constant barrage of United attacks from a side that contained only two defenders, one of which was an infrequent starter, one a nineteen year old debutant, in truth there was nothing this side could do but attack and attack they did.

Owen’s swash-buckling performance in the three-nil win over our old cross-pennine rivals got me thinking, this guy could easily get into the first teams of most Premier League teams and on the basis of last night do a very good job in United’s. However Owen’s position as what is probably fifth choice striker is down to the wealth of talent that comes above him, United have so much talent in the striking department and getting in ahead of Rooney, Hernandez, Berbatov and now Welbeck is proving a tough nut to crack for the veteran England forward. However with Hernanez injured and Welbeck only just returning from a stint out due to a hamstring strain will Owen get the chance to shine against Stoke on Saturday? Well, I am tempted to think not, I have a feeling Ferguson is more likely to opt with a striker with bigger aerial presence like Welbeck or more likely Berbatov, or Berbabauer as he is now known after his stint at Centre-Half on Tuesday evening. This would be immensely dissapointing for Owen, if this proves to be the case as surely his performance merits the start? However Ferguson did reiterate his stance at the start of the season in that if you are playing well you will play; hence the continued inclusion of Welbeck and Cleverley, so maybe Owen will get his chance.

Regardless of whether Owen plays against Stoke or not it is unlikely he will be able to string a number of games together, even if he does manage to stay fit; with Hernandez likely to link up with Rooney upon the Mexican’s return. On this basis did Owen do the right thing in re-signing for United?

Well for those who are saying Owen should have moved on to pastures new in the summer consider this, if you will. Owen is now thirty-one and is nearing the twilight of his career, he has been given the oppurtunity to work with one of the greatest managers ever to manage and to play at one of the best clubs in the world. He knew he would not be playing every week however his ethos appears to he would rather play infrequently for a team challenging for the biggest honours  rather than regularly for a team aiming to maintain mid-table stability.

Owen may have started his first game since January on Tuesday but the season is only in it’s early stages and there is plenty of football to be played. Owen will be needed make no mistake, injuries, formation changes and rotation will see that he gets his fair share of Football this year, furthermore I say we should consider ourselves very fortunate to have a striker of Owen’s quality to call upon as back-up. On the rare occasion that it doesn’t happen for the likes of Hernandez and Rooney then calling upon a striker who has a goal to game ratio of eleven goals in twelve starts in his United career is not bad at all.

I would summate that yes Owen probably deserves better than infreqent starts in the League Cup and the odd substitute appearance in the league however if he is happy to settle for it, than I am more than happy to have him. After all his goals have been and will be very important to Manchester United in the weeks and months to come.