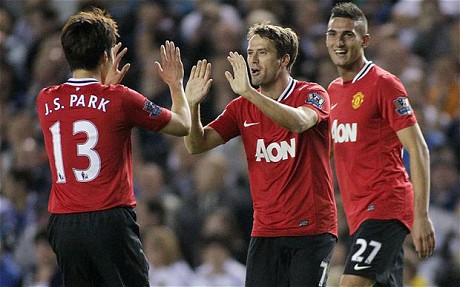 1. Satisfying performance. We kept the ball well throughout the match, with a few of the youngsters pulling off incredible Hollywood passes across the pitch. One of the oldies, Michael Owen, performed brilliantly. Scoring two of the goals, Michael proved he hasn’t lost his goal scoring ability. The confidence within the team was exceptional. Obviously, it wasn’t free-flowing football like our first team but it wasn’t far off. Truly enjoyable.

2. Our away support was magnificent too, singing some of the old chants. The best away support I’ve heard in England for a long time. The Leeds support were non-existant, apart from the horrible Munich jibes. Although, it was reported a small percentage of United fans sang about that Istanbul incident. Both disgusting.

3. There was a total of three debutants tonight; Zeki Fryers, Paul Pogba and Larnell Cole. Fryers started a center-half alongside Michael Carrick, and the other two were substitutes in the second half. Zeki used his speed whenever needed, however, Leeds didn’t really test our back four. Pogba impressed everyone with his long range off passing and composure. Although, he needs to concentrate on the basics too. When you play top teams you won’t get the same amount of space on the ball. Difficult to comment on Cole’s performance. He didn’t get much playing time, but still managed to look extremely confident on the ball.

4. Dimitar Berbatov got his first start of the season. Unfortunately, it wasn’t one to remember. He didn’t do enough up front, but when Zeki Fryers walked off the pitch with an injury, he moved back into defense. And believe it or not, he did a decent job. Be afraid, Nemanja, be very afraid.

5. The biggest disappointment of the night was Federico Macheda. The Italian had a brilliant pre-season tour, therefore, most fans expected an improvement from last season. Yes, he was played on the wing and he’s an out and out striker. Blah, blah. He needs first team football, and he needs it now. To walk away from that disappointment, I should mention how surprised I was with Mame Biram Diouf – another striker played on the wing. He looked hungry to impress, delivering and receiving the ball. Hope he can keep it up.

4 responses to “Quick reaction to 3-0 win against Leeds”