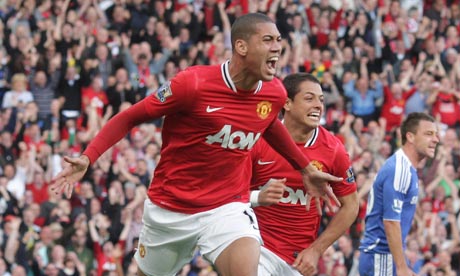 1. Brilliant game of football. Extremely enjoyable. Chelsea came to Old Trafford looking to attack, and they completely bossed the center of the pitch. That leaves a question mark over Anderson and Darren Fletcher, who both performed poorly. Up to now, Anderson has been consistent, whereas Fletcher’s fitness remains questionable.

2. Nani received Sky Sport’s man of the match award, and rightly so. The Portuguese winger caused a number of problems for Chelsea’s puzzled looking defense. Everything pulled off for him today, therefore, he didn’t have me weaving my fist in frustration. If you follow us on Twitter, you usually see hot-headed tweets aimed towards Nani. Thankfully, that wasn’t the case today. To make it even more special, it was his 100th appearance under Sir Alex Ferguson.

3. If it wasn’t for Fernando Torres, I would be expecting newspapers to be full of Wayne Rooney’s penalty miss tomorrow. Despite scoring his second ever goal for Chelsea, it was a day to forget for the Spaniard. He provided the miss of the season, after taking the ball around David de Gea and failing to hit the target in front of an open goal. He was an absolute bargain.

4. Dimitar Berbatov replaced Javier Hernandez in the second-half. Our number nine looked more bulked up since we last seen him, which was in America at the pre-season tour. He also scuffed a decent chance when Rooney tried to set him up before Ashley Cole cleared the ball off the line. It was great seeing him back.

5. Phil Dowd became the first referee in Premier League history to book a player for a challenge inside the box, but not award a penalty. Ashley Cole could have easily broken Hernandez’ leg with that reckless tackle. As a result, the Mexicutioner struggled off the pitch injured. Unsurprisingly, Cole had a few words to say about the incident – shouting in the refs face. Will he be punished? No.