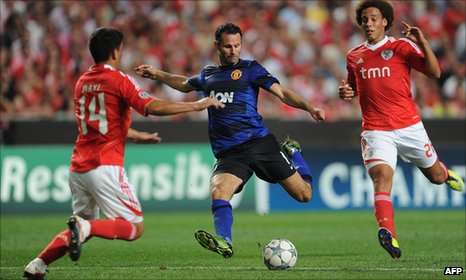 It’s finally back! After that miserable night in London almost 4 months ago, Manchester United are aiming to overthrow Barcelona and once again be crowned Kings of Europe.

The Champions League draw has been very kind to us this year and the opening fixture away to Portugal’s number two Benfica was undoubtedly going to be the hardest of all 6 games. And so it proved.

Given our electric start to the season, we fans could be forgiven for expecting this to be a routine victory but Benfica are no pushovers. They have taken 10 points from a possible 12 domestically and brief moments of class proved that they will be our biggest rivals for the number one spot in group C.

With one eye on the weekend clash Chelsea, Sir Alex made 8 changes from the side that took Bolton apart on Saturday. De Gea, after a shaky start to life at United was rested in favour of Anders Lindegaard, although this was a change deemed necessary to give the Danish keeper some playing time and De Gea has already been confirmed for the match against Chelsea. Also coming in were Fabio, Smalling, Valencia, Carrick, Fletcher, Park and Giggs.

From the  first whistle, United looked nervy. Passes frequently went astray and Fletcher in particular looked very sluggish after his long period on the sidelines. Antonia Valencia in his first appearance of the season, looked particularly dangerous, beating his left back Maxi Pereira on a few occasions which almost led to an early goal.

The first goal however came from Benfica, after a good period of possession for United where we looked comfortable if not spectacular. The impressive Gaitan picked out Cardozo with a clever ball, and the Paraguayan made no mistake in rounding Jonny Evans and firing past Lindegaard. It was a terrific team goal and the only blame that can be attributed to a man in red, was to Evans, who was left flat footed by Cardozo’s control.

As is tradition for any Manchester United team, we rode the storm for tor the next 15 minutes and re-established a foothold in the game. Eventually this paid off and it was up to the ageless Ryan Giggs to get the equaliser 3 minutes from half time. The Welshman cleverly cut in from the right and unleashed a left foot screamer from the edge of the box which left the Benfica keeper Artur with no chance. Giggs once again showing that his class and experience could be vital for our success this year.

In the second half Pablo Aimar was a constant threat and time and time again found pockets of space between defence and midfield. The tricky Argentinian always looking to send Cardozo through and if it weren’t for the quick thinking of Smalling may have done so on many occasions. Once again Gaitan was causing our defence all sorts of problems and a good run led to the best chance of the half for very talented Nonito. Lindegaard however produced a top class save, getting low and sending a goal bound shot from the edge of the area round the post. Lindegaard did his claims for the number one jersey absolutely no harm tonight, making some exceptional saves and always looking comfortable at set pieces.

Wayne Rooney played on the fringes of the game for most of the match, mainly due to a lack of service from the wings and sloppy passing through the middle. Indeed it was Giggs again who almost put United in front after clever link up play with Rooney and Evra, but the Benfica keeper made a fine save to keep his side in it. However it was the Benfica captain Luisao who was most impressive tonight. The giant Brazilian was a colossus, always in the right place at the right time and he kept Rooney very quiet, in the rare instances he had a sniff at goal.

Nani, Jones and Hernandez replaced Park, Fabio and Fletcher towards the end of the game and none made a lasting impact. Berbatov however was left on the bunch, surely just confirming that he will be a bit part player this season?

It was a tough night at the Stadium of Light. We were certainly nowhere near the levels we are capable of, but it was a professional champions league display nonetheless. Lindegaard was our stand out player and will surely give De Gea restless nights with more performances like that.

That’s the hard game over. We should have more than enough in the tank to top the group with another 13-15 points from our last 5 games. With some rested players and a point away against Benfica, I for one am reasonably satisfied with tonight’s result.

If you want to discuss the game or Man Utd in general, add me on twitter @stephenbusby88