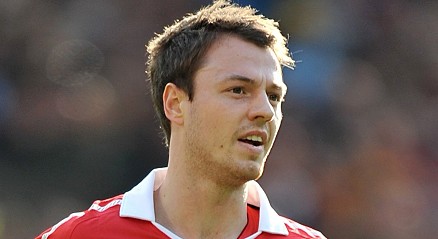 Manchester United defender Jonny Evans fears his place in Ferguson’s squad may be put into question, if he doesn’t up his game this season.

Despite performing poorly throughout 2010/11, Evans started the majority of our games this season due to Rio Ferdinand’s injury. However, the Northern Ireland international is aware of those disappointments last season and he’s willing on putting them behind him.

“I didn’t hit the form I wanted. I went away and thought maybe I have another year – if I had another season like that, I’m sure the manager wouldn’t want me around,” Evans said.

“I wasn’t playing consistently to a good enough standard for Manchester United, so I’ve gone back to basics and worked hard.”

And it’s quite obvious the hard work has paid off because Evans knows himself, if he doesn’t keep up his current form he will pay the price.

“No matter who the manager gets rid of, or signs, thee are so many players who can step into so many different positions it’s crazy,” he said.

“If you’re not in his plans, he will move you on. If you are here, you have a great chance of being involved.”

With important matches coming up, including a visit to Elland Road in the Carling Cup along with Premier League and Champions League fixtures, Evans said:

“We have a lot of big tests coming up.”

Going away from home to get a result will be tough with such a young side, so I am sure the manager will tinker with it when the time is right.”