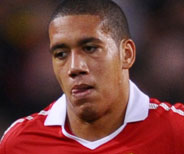 The 21-year-old, who joined United from Fulham last year, has established himself as a key player in Ferguson’s starting eleven. When Rio Ferdinand struggled with a few injuries last season, Chris stepped up and played an important role beside Nemanja Vidic.

Since the pre-season tour, Smalling has played in the right-back position. The boy’s constancy found him an England debut last week against Bulgaria in a Euro 2012 qualifier.

However, with the best to come from Smalling, he insists he has no intention of leaving the greatest club on earth.

“I don’t look too far ahead but I hope I can really get an established career and hopefully stay here for the rest of my life,” Smalling told Inside United.

“I want to get more and more games as it goes on because I really feel part of this club. I’m really enjoying my football at the minute. The manager’s got full faith in me and I want to reward that in the years to come.

“It’s about kicking on when you get chances, like I managed to last year. I’m starting to feel like I really belong here and, the more games I get, the better player I’ll be.”