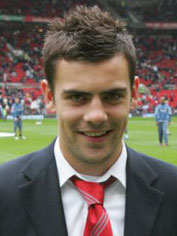 According to the Daily Mail, Aston Villa are about to offer Manchester United £3.5 million for Darron Gibson. The Irish midfielder is supposed to be fed up with the lack of first-team football and is eager to leave United for another top-flight club.

The moody Irishman appeared to be on his way to Sunderland, along with John O’Shea and Wes Brown, but negotiations broke down because Gibbo wasn’t happy with the contract they offered. They supposedly promised more than what they actually offered, so you can understand why Darron didn’t accept.

Ferguson has already planned for life without the one-trick-pony, after promoting ex-Wigan loan star Tom Cleverley a starting place in his extremely young starting eleven. Even with the retirement of Paul Scholes, I don’t think many, if any, United fans expected him to get any more chances. Especially with another midfielder named Paul Pogba coming up the ranks.

Gibson didn’t travel with the squad to America for the pre-season tour, nor has he made a senior appearance this season. However, from twenty club appearances last season he only managed to score two goals. That stat explains a lot.

Anyway, if Gibson joins another club before the transfer window shuts, StrettyNews.com would like to thank him for his time at the club. He had his chance, but unfortunately it didn’t work out.