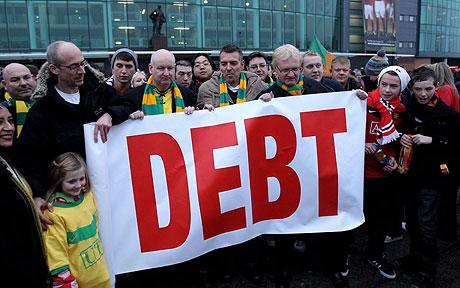 According to reports from Sky News and many other respectable sources, the Glazer Family are planning to raise around $1 billion (£610 million) by selling shares on the Singapore stock exchange by the end of 2011.

Manchester United planned to list in Hong Kong, but the markets told the club they would not be allowed to float in China due to their current debt situation. It’s now thought the Glazers will carry out an initial public offering (IPO) in Singapore this winter to help raise funds reducing the debt and decreasing the interest.

However, it isn’t definite that the controversial American family are set to sell over 30% of the club. StrettyNews.com, among other sources, believe United’s owners will be examining offers from the Singapore stock exchange this winter, planning to make a decision sometime by the end of the year or maybe early 2012.

If this was to go ahead, it would give the supporters some insight in to how the club is being run. Although the Glazers would still own the majority of shares and essentially retain the right to run things however they wish.

The future of the Glazers has been under speculation a lot since their takeover in 2005. Earlier this year, the Qatar Royal Family were heavily linked with buying the Premier League champions, valuing the club from £1.7 to £2 billion. Like the speculation surrounding the Red Knights, nothing came from it. Lets hope this doesn’t result in the same way.

Last month, Forbes, listed Manchester United as the most valuable sport teams on earth. They said:

The Glazer family, which also owns the NFL’s Tampa Bay Buccaneers (No. 18 at $1.03 billion), bought United in 2005 for $1.5 billion, but quickly drew the wrath of fans after the purchase saddled the team with a massive debt load. Fans feared the team would not have the resources to pay top players. In November the Glazers paid off $330 million of the debt which now stands at $756 million, or 41% of the team’s value (the average debt-to-value ratio of the top 50 franchises is 26%). Even better for fans of the Red Devils, the team captured its record 19th English Premier League title this year and made the finals of the UEFA Champions League before falling to Barcelona (No. 26 on our list, worth $975 million).

The finances of Manchester United continue to look up. This season marked the first year of its new shirt sponsorship with Aon, worth $32 million annually over four years. It represents a 50% bump from its prior deal with AIG. The team is reportedly in line to get a similar increase for its merchandise deal withNike, which already pays United nearly $40 million per year. The current 13-year contract is set to expire in 2015, but a new deal is expected to be done by next year that could be worth as much as $70 million a year. Reports surfacedlast month that United is considering selling shares on the Hong Kong Stock Exchange at a price that would value the club at $2.7 billion.

The Reds have over 350 Million supporters worldwide, many whom are living in Asia, and of course Singapore which is more important in this situation. The Glazers could have planned this move for some time, if you look at how they sent a few of our stars, including Park and Ferdinand, to Asia with the Barclays Premier League trophy. That obviously increased interest among the people of that continent.

According to United Latest, the press office refused to comment on the story.