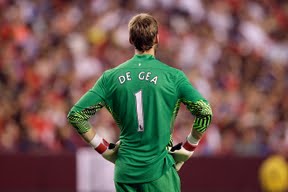 Football seems to produce two types of goalkeeper:  the madcap, game-winning, game-losing loon exemplified by Fabian Bartez; and the steady, safe, assured sentinel, but a sentinel that seldom produces an explosive save, the greatest example of which, has just retired.

A quick read of Monday’s papers would convince you there is a third type: a gangly, bum-fluffed, timid boy who collapses with the grace of a Costa Blanca deckchair.  David de Gea seems to be the sole representative of this final group (Alumunia’s facial hair is far too cultivated).

They’re wrong, the only other keeper to be unique enough to have his own group was Peter Schmeichel; a bacon-fuelled hybrid of types one and two; a game-winner infinitive more times than a game looser. A stopper only tainted by some dodgy employment decisions.

The Titanic may have had a more successful start than De Gea but the guy shouldn’t be drowned in this current icy torrent of negativity.

He’s made mistakes. He has been shaky throughout, yet United have won 2 from 2. The mistakes have cost goals but not games. Every other player in our two games has made as many mistakes as the new keeper, yet none have received the type of press treatment usually set aside for England managers and forgetful Aussie media tycoons.

Most rational United fans say they will afford him time. How long? In Anders Lindegaard, United have a standby cut from Nordic snow, with a temperament to match. Lindegaard will come in and he won’t make mistakes; he won’t be beaten by a pea-roller from a cocky Championship up-start; he won’t make City fans giddy when their latest misfiring mercenary shoots from 25 yards.

But is that enough? Looking at Spain and Barcelona for the solution may be as unpleasantly obvious as Gervinho’s forehead but both Casillas and Valdez produce their share of extraordinary game-winning saves.

And that must be Sir Alex’s thinking.

De Gea was no mug in a Athletico shirt. Already the young Spaniard has shown a type of passing range and distribution Wes Brown would grow some corn-rows for.  Fergie was impressed enough to spend £18 million on him. Contemporaries like Pepe Reina and Iker Casillas beamed as they gave the type of school report normally reserved for pupils with incriminating photos of their teachers. He isn’t suddenly rubbish.

The excuses are there, creaking under the weight of the ridicule: he’s young; it’s a new country; there’s language difficulties; the premier league is more physical than La Liga. But his fallibility to a daisy-cutter is more blatant than Joey Barton’s new quotations book.

Eric Steele and United’s coaching staff will work on it and he will eradicate it and then the rest will fall into place.

United’s defence will be fairly makeshift over the next few games and it could be the making of De Gea. You can imagine Vida and Rio are two big-swinging-dicks in the dressing room and the adolescent David would, quite rightly, be intimidated by them, but playing with peers like Smalling, Jones and Evans he will be more demonstrative and commanding and not afraid to make a mistake and subsequently ,hopefully, will not make a mistake.

Potential  means little to a football fan, but de Gea has a lot of it, enough to warrant perseverance, enough to become that most rare of things: game-winning keeper.

By Steven, who recently worked at Manchester Evening News.