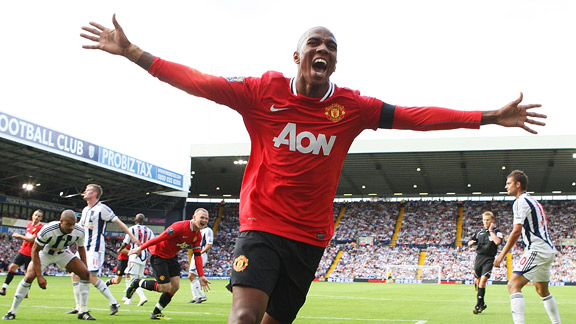 It’s been a while since we reported from a competitive match, but we’ve had a good rest and are ready for the season ahead. Manchester United travelled to the Hawthorns today to play a West Brom side, who were without their top goal scorer from last season, Peter Odemwingie. However, it gave Shane Long a chance to impress at his new club.

Despite the harsh words we get from the press, most journalists up and down the country have tipped us to reclaim the Barclays Premier League for the second year in-a-row. Reason being, we’ve strengthened a squad that did brilliantly last season – not only winning the league but reaching the Champions League final also.

I commented on United’s away form (from last season) in recent interviews with Back Page Football and World Football Daily, so I felt a win today was crucial, especially with Liverpool, Arsenal and Chelsea dropping points. The win moved us into second place behind Bolton, who trashed Queens Park Rangers 4-0, yesterday at Loftus Road.

Manchester United started the game with Berbatov and Carrick on the bench, giving Danny Welbeck and Tom Cleverley a chance to make an impact. Kevin Livingston, a regular contributor for Stretty News, wasn’t too far off with his starting eleven prediction.

We played at a fast pace keeping the ball well from the start, putting the Baggies’ back four under pressure at times. They kept their line well though, with an attempt to get the majority of their players behind the ball. The Reds had 90% of the possession at one stage; that’s enough information to inform you who bossed the first-half.

It didn’t take the champions long to open the scoring with Wayne Rooney burying a shot in the far corner after 13 minutes. The early goal didn’t effect the way United played as we continued cutting holes in West Brom’s defense. Nani had two opportunities afterwards to increase the scoreline, but the Portugese winger blazed them over the bar.

The Baggies scored an equalizer after 37 minutes. Shane Long, who was desperate to impress in front of his new fans, scored from a low shot that found it’s way through David de Gea’s hands and into the back of the net. As expected, journalists made most of the Spaniard’s blunder on Twitter. Naming and shaming would be a waste of time, I’m afraid. You probably know who they are anyway.

Roy Hodgson’s men looked the better side after the second half kicked off. United still looked a bit shocked after Long’s goal, but that didn’t last very long. Once Dimitar Berbatov replaced Danny Welbeck, United were back in control. Anderson got lost in his more defensive role and Welbeck wasn’t supporting the midfield. It was time for the Bulgarian to step in and make a difference. When I say ‘difference,’ I don’t mean scoring the winner. He gave United more options by holding up play giving the players more time to get forward, and he helped keep possession.

Manchester United scored a late winner in the 81 minute thanks to Ashley Young, who cut in from the wing and crossed to take a deflection from Steven Reid. Unfortunately, the goal will stand as an own goal which means we will have to wait a bit longer before seeing Young score his first goal, in Red.

Despite getting the three points, United suffered a few blows with Nemanja Vidić and Rio Ferdinand both picking up injuries. I’m sure the club with get them looked at and announce how long they are expected to be out absent, in the coming days.

Manchester United welcome Tottenham Hotspur to Old Trafford on Monday 22nd. Make sure you follow us on Twitter & like us on Facebook to get all the latest news and opinions regarding the greatest club on earth.