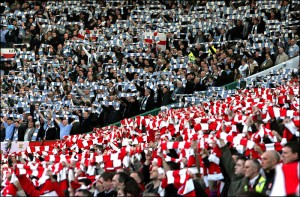 Local pride: Who will be singing when the final whistle blows?

Form: United go into this game on the back of one hundred percent record in preseason. The reds have been prolific in front of goal and assured at the back, knocking in 25 goals and conceding just three. City themselves have been unbeaten in preseason also, clocking up four wins and one draw on their travels.

Team News: United have just two confirmed absentees for this game, Michael Carrick with an Achilles problem, and Hernandez given more time to recover following a recent concussion. A busy week means the boss will probably rotate the team a bit, with more emphasis on those who need match fitness than putting out our strongest eleven. City have new boys Clichy and Savic available for selection, with £38million signing Aguero set to make the bench. They will however be without Carlos Tevez, who has been granted additional leave from the club in the wake of his expected departure.