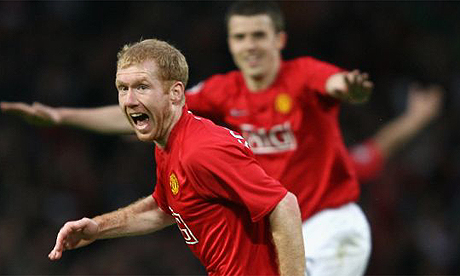 For me, today will be one of the most emotional days of my life. Manchester United, our beloved club, will see a hero play his last ever match at Old Trafford, the Theatre of Dreams.

The Ginger Prince wasn’t a member of the team that won the FA Youth Cup in 1992, but he still goes down on that list of ‘kids’; along with David Beckham, Gary Neville, Ryan Giggs and Nicky Butt. All the players listed in the last sentence are well respected within the club and world football, not only for proving Alan Hansen wrong, but because they’re true reds.

Scholesy was a rotation striker in his early years, later pulled back into midfield. I would go on about Wayne Rooney going down the same route but today it’s about Paul Scholes – nobody else.

Like another club legend (Bobby Charlton) ‘Sat Nav’ scored twice in his debut. Ferguson knew he had something special on that day in September 1994. His two goals helped United in a 2-1 victory over Port Vale in the Football League Cup.

Manchester United fans got to see a lot more of Scholes in 1995-96, when Mark Hughes moved to Stamford Bridge. In all competitions that year, he managed to score fourteen goals helping United become the first English team to win the double twice. It wasn’t until the 1997-98 season, he was pulled back into a more central position – due to a knee injury Roy Keane picked up. The same injury Alf-Inge Haaland accused Keano of feigning to avoid punishment.

Anyway, on to the rest of Scholes’ career as a Red. I think it’s fair to say everything Eric Cantona taught, Scholes knew. He could control a game with ease. It always looked like he always had a yard of space in his back pocket – a bit like Andrés Iniesta in the modern game.

You can say no words will do this man justice but if I was to pick three, and three only… they would have to be: Touch, Control, Pass. These words are probably the best to describe Paul Scholes on the pitch. Off the pitch, he was a true professional. An extremely shy one.

As his career went on, Scholes didn’t score as many goals. But the strikes against Aston Villa and Barcelona will stand out when people look back at what he did for Manchester United. It’s not about the goals though; his range of passing never seemed to decline with age. To this day, Scholes can still glide a ball 40+ yards across the pitch without struggle.

In a knowledgeable footballing nation the emerging of a player like Scholes dictates everything for a decade. Players like the Ginger Prince don’t come around very often – that’s why there’s pressure on Ferguson at the minute to find a player that can sit in the same position as the red-head. There’s no point asking for a replacement because Scholes cannot be replaced.

I’ve embedded a song by Ian Brown below called ‘Always Remember Me’. I think it fits this article perfectly.

Goodbye Scholes, thanks for all the happy memories.

6 responses to “Saying goodbye to the great, Paul Scholes”