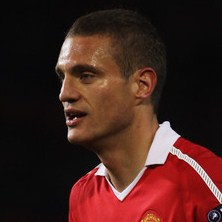 When Sir Alex Ferguson started our summer spending on centre back Phil Jones from Blackburn, a lot of people wondered why? United already have Rio Ferdinand and Nemanja Vidic forming the best defensive partnership in the League and 2 very talented youngsters in Jonny Evans and Chris Smalling filling in well when needed. Jones did spend the majority of last season playing in midfield for Blackburn but he is yet to feature there for United in any pre season game so far, suggesting that Ferguson sees him predominantly as a centre back.

This means that going into the new season United have 5 centre back options. Let’s take a look.

Captain and one of the first names on the team sheet. He played more league minutes (3117) than any other United player last season and was key to winning the title. He also made a valuable contribution by scoring 5 goals; no other United centre back scored.

I expect Vidic is nailed on to the be starting any game if fit.

Rio however, only managed approximately half of Vidics league minutes in a season blighted with injuries. Turning 33 in November, and affected by injuries over the last few seasons, it will be interesting to see how he performs this season and whether he can stay fit enough to really solidify his partnership with Vidic. Rio when fit is still one of the greatest defenders in the game recording the best duel and tackle success amongst United centre backs last season.

When United splashed out 10m of a defender who a year earlier was playing non league football, eyebrows were raised. One season later and he has proved why. A tremendous first season at United saw him play 16 league games including a great display in the Manchester Derby. Calm on the ball and assured in the tackle, Chris Smalling is resembling a young Ferdinand as each game passes and his partnership with Vidic towards the end of the season helped see United to the title.

Evans had a difficult season after such a great 09/10. His form dipped and with it he seemed to lose some confidence to which some fans very wrongly claimed he wasn’t good enough. Ferguson seemed to pull him from the first team and give him a break. He returned towards the end of the season where he also got games at full back, which could be where he find games this season after O’Shea’s departure.

Although Jones played in midfield for Blackburn last season, his performance against United at centre back the season before sticks in the mind and could have been a big factor in his signing. He has spoken how he is a defender and prefers to play there although his versatility will be useful. His partnership in the England u21 team with Smalling looked great, with the 2 continuing it in pre season. Exciting times ahead for United.

With Vidic nailed on, the battle will be for who plays alongside him. If Ferdinand is fit then I’m sure he will get the nod but with his recent fitness issues the 3 youngsters will have his spot in their sights.

My tip for the season? Chris Smalling to play more games than Rio Ferdinand.

By Shaun Birch, who also had a look at Ferguson’s options on the wing.