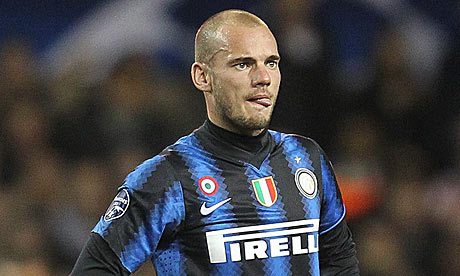 Inter Milan claim they have not yet received a bid from any club for Wesley Sneijder, but the Serie A giants have not ruled out selling the Dutch star, who I’m sure would have come out by now if he wasn’t interested in joining the Reds.

The 27-year-old playmaker has been linked with a move to Old Trafford since the summer of 2010, but now that United are in need of a replacement for Paul Scholes. So, I think it’s fair to say it looks more likely this time round.

Milan’s chief executive Ernesto Paolillo has confirmed that the club have not had any contact from the Premier League champions about the midfielder, but refused to rule out selling him.

Paolillo told Sky Sport Italia: “Are Manchester United still after Sneijder? We haven’t seen or heard from anyone.

“Is Wesley definitely not for sale? I don’t think there’s anything that can’t be sold, it all depends on the price.

“You never say no if a big opportunity comes your way, but it does have to be a real opportunity.”

Image from the Guardian