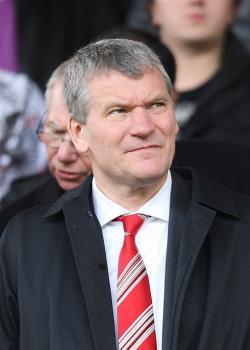 Since arriving in America with the squad, Sir Alex Ferguson hasn’t been interviewed without answering a question regarding Paul Scholes’ replacement. However, Fergie has adopted a downbeat attitude letting the press know that the type of player we want isn’t available, so our summer spending may be coming to a close.

“We are not looking at the moment but we are looking at combinations of central midfielders now at the club,” Ferguson said earlier this week.

Maybe it was mind games from the 69-year-old, but thankfully David Gill came out today with an exclusive interview from MUTV (Manchester United television) and admitted the club are searching for one more player.

“We are looking at one more player to bring in,” he said.

Who could that “player” be? With Luka Modric wanting to sign for Chelsea and Samir Nasri heavily linked with a move to Manchester City, the only player that springs to mind is Wesley Sneijder, who has been mentioned regularly as a potential recruit. David Beckham had his say on the matter last weekend, after LA Galaxy lost to City on penalties.

David Gill also confirmed there are no discussions currently ongoing, as Ferguson has repeatedly told the press.

“There will still be 31 days of the transfer window to see if anything develops. The important point to understand, and Alex has made clear, is that we need someone who is going to improve the quality of the squad.

“We have a great squad and to get into that squad you need to be a world class player. If you can’t get the players you want, there is no point buying someone for the sake of it.

“But you never know. There is often movement in August.

“I am not saying I am working on anything specific because I’m not. But that situation could change quickly when we get back to Carrington.”

6 responses to “David Gill: United are looking at one more signing”