Kevin Levingston reports on the all too brief United career of the Canadian enforcer. 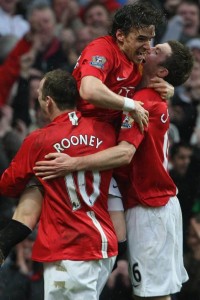 May 21st2008. Luzhniki. Moscow. Ronaldo’s saved attempt and Lampard’s converted spot kick had put Chelsea 3-2 ahead on penalties, and now it was United’s turn again. This was not a moment for the faint of heart. A miss here would all but ensure the faithful red army would return to Manchester empty handed, and place ol’ big ears into the waiting hands of the London club.

The Calgary born midfielder placed the ball on the spot, took a quick run up and rifled his shot high into the top left hand corner of the goal, soaring past the flailing arms of Petr Cech. We all know what happened next, but for Owen Hargreaves it was the perfect end to a very successful first season in the red of Manchester United. He had played as important a role as any in the historic double winning side, scoring and creating key goals en route to the clubs seventeenth league title and third European crown. The future seemed bright for the former Bayern midfielder.

It was the last meaningful contribution he would ever make in a United shirt.

The man himself had arrived the previous summer for a fee of £17 million, in what he described as “possibly the longest running transfer saga in history”. Perhaps most significantly however, was the leap of faith the reds took on his fitness, signing the midfielder before he had fully recovered from the broken leg that had kept him out of all but the final moments of his last campaign with Bayern.

It would prove to be a dire mistake in the long run, though at the time there was nothing to suggest that Hargreaves would make anything other than a complete recovery from his injury.

At his best, Hargreaves was a force to be reckoned with; a battling, unyielding, unrelenting box-to-box midfielder who was probably the closest the Reds ever came to replacing Roy Keane, comfortable while both attacking and defending. Yet the Canadian enforcer had ability while in possession that eclipsed even the great Irishman, a talent that saw him often deployed in a wide role at United as his first season came to its climax. His abilities were not unnoticed at international level either as he was voted England’s player of the tournament during their ultimately unimpressive 2006 World Cup effort. He was quite simply a rare breed, a fact highlighted by the calls for him to later be included in the 2010 world cup squad, despite him being injured for the entire season leading up to the tournament. Then as now, it was his fitness, not his ability that he needed to prove.

As the 2008-09 season gathered momentum, Hargreaves was conspicuous by his absence. He had been struck with a bout of Patellar Tendinitis, a condition often associated with athletes recovering from leg fractures; something he would later admit had been giving him trouble for most of the previous season.

It was the start of an injury nightmare that would plague him for the next three seasons, making just five further first team appearances in that time, often just for minutes at a time.

Last season, there were cries of shock and disbelief as Hargreaves was named in the starting line-up to face Wolverhampton Wanderers on November 6th. For the die hard romantics watching on, it was the great return of a very popular player. For the cynics and even the realists, it was too good to be true. As it turned out, the latter view was the correct one. Hargreaves was on the field for five minutes before pulling up with a hamstring injury. It would turn out to be the player’s last appearance for the club.

How an uninjured Owen Hargreaves would have fared at United in the long term is sadly an issue that now must be condemned to the realm of the hypothetical, but there are many who believe that today a fully fit Hargreaves would still walk into the United starting line-up. We will never know for sure.

In a summer where United bid farewell to club icons such as Edwin Van der Sar, Paul Scholes and John O’ Shea, its easy to forget the exit of the classy Canadian enforcer. While our greats bask in the deserved plaudits from fans and fellow professionals alike, Owen Hargreaves slipped out the back door with nothing to bask in but the bitter taste of a career as yet unfulfilled.

The exit of United’s forgotten man may not be of immediate significance to many, but for others it’s a harrowing reminder of the cruel nature of the game we love so much. Hargreaves could have been a true United hero, and in truth injuries robbed him of the tenure and farewell that his talent and ability deserved.

The quiet man is now entrenched in a youtube campaign to prove his fitness to potential suitors, the outcome of which remains to be seen.

If reports are true then some of us United fans may have reason to cast our eye towards a certain Midlands club when checking the results this season.

The chance to resurrect a career cut short is something no United fan would begrudge him.

These views are my own and do not necessarily reflect those of Strettynews.com or its affiliates.

Comments, feedback and questions welcome here or on twitter: @KevinLevingston