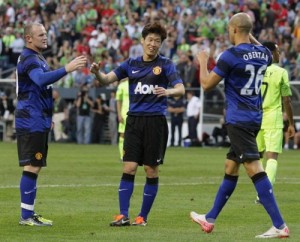 Park celebrates his second tour goal with Rooney and Obertan

The Reds built on their promising start on tour with a second victory in as many games. The Seattle Sounders provided the opposition as United recorded an emphatic seven goal victory. However the game was not as one sided as the score line suggested. A second half goal blitz put a gloss on what was a very strongly contested game, resulting in a final score that was perhaps somewhat unfair to the Sounders.

Sixty seven thousand fans packed the Centurylink Field, home of the Seattle Sounders, in an unusually electric atmosphere that would not have been out of place in the premier league. The Sounders are the best supported association football team in the states, and it was clear from the off that these fans and their team were not just here to roll over for the visiting Reds.

The home team started with vigour to match the passion in the stands, with fan favourite Freddy Montero twice attempting audacious chips on Anders Lindegaard, neither of them too far away from their intended target.

Never ones to shirk a challenge, United responded in the best way possible; Young and Evra combining down the left, the Frenchman crossing for Owen to head home in the fifteenth minute.

It was a sign of things to come as United imposed themselves on the game. Ashley Young forced a smart save from veteran stopper Kasey Keller, before Michael Owen had a chance cleared off the line, and Kiko Macheda headed narrowly wide from close range.

The home side were undaunted by the visitors’ dominance and continued to attack sporadically, Montero and Riley forcing a fantastic double save from Lindegaard before half time.

In the forty third minute it should have been two. Ryan Giggs’ superb swivel and pass found Michael Owen inside the box. Beating the offside trap and finding himself one on one with Keller, the veteran striker should have done better, but crashed his shot against the outstretched leg of the opposition keeper. It would be the last meaningful action of the first half.

Sir Alex made four changes at the break, and within six minutes two of his subs were on the score sheet.

Mame Biram Diouf made it two nil in the forty-eighth minute, expertly rounding sub keeper Terry Boss to finish after Nani had cut inside and found him with a superb lofted pass. Rooney was next to put his name among the scorers, Nani’s pass finding him at the back post after some good work down the right by Rafael da Silva. It was an emphatic finish and a great show of composure from the Reds number ten which effectively ended the game as a contest.

The home team were not ready to give up just yet however, with Mike Fucito forcing an acrobatic save from Ben Amos after a jinking run past Nemanja Vidic. The Sounders would again break forward in the sixty-eighth minute, Pat Noonan’s close range effort tipped onto the bar by the young Reds keeper.

Three goals in as many minutes then put the game completely out of reach of the home team. First Carrick’s long ball found Ji Sung Park out wide, who pulled the ball back for an onrushing Wayne Rooney to finish with his left foot. Next Obertan broke down the right and passed the ball into the area, Rooney leaving the ball for Park to finish low to the keepers left. Rooney completed his hat trick in the seventy-second minute firing low into the corner after some good link up play with Obertan.

The much maligned Frenchman impressed in this game, getting on the score sheet himself in the eighty-eighth minute after breaking clear of the defence and finishing with aplomb high into the net, showing his career at Old Trafford is not beyond saving as some had suggested.

It was United’s seventh and a fitting end to a very accomplished performance at the Centurylink field, both teams being applauded off by both sets of fans at the end. The fans themselves set a fine example for the rest of world football, with Reds and Sounders fans alike sitting together and enjoying the game.

United’s next game comes against Chicago Fire at the Soldier Field this Saturday 23rd of July. Kickoff is at 10pm BST