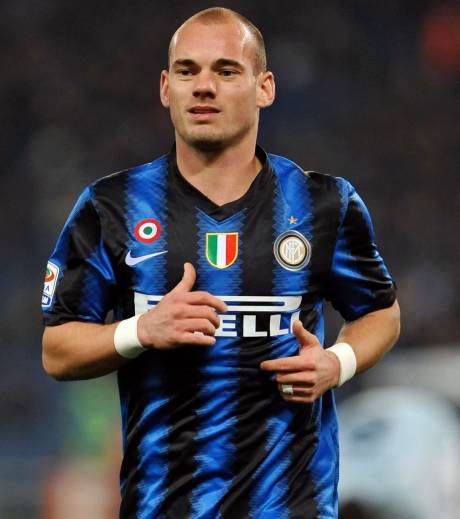 Silly season is well and truly under way with papers scrambling to report both the latest scoops and of course the pointless rumours. One such rumour that has persisted since the World Cup last summer has been Manchester United’s interest in Wesley Sneijder. Now, I have been doing my best to keep up with the goings on, and by reading between the lines of both reputable and worthless sources, I will give my opinion on what I think is going on.

First, we had a glowing report from our first team coach Rene Meulensteen:

“I cannot actually think of a more ideal player for our team (sic)…I don’t know what his future is at Inter, whether he may leave or whether he’s affordable. But, purely based on football skills, I say get Sneijder.”

This was reported in The Independent on July 6th and this is one source you can count as reliable. Now, knowing what Sir Alex Ferguson is like with his staff, i cannot see Meulensteen saying this without at least speaking to the manager about it. Sir Alex always plays his cards close to his chest and i firmly believe that without his blessing, Fergie would be furious with Meulensteen for making this comment. I think this all but confirms our interest.

Gary Neville also had this to say of Sneijder:

“”He would be a great signing, but I’m sure there are a number of clubs that are looking at him. I hope that Manchester United get him, but I don’t know whether that will be the case.”

These quotes were reported in various news outlets. Again, i believe comments like these from a player who is very close to the manager, shows that Sneijder is well and truly on our radar.

Now what of Inter and the player himself? The Guardian (who are perhaps the most reputable source of football news, reported on Monday that Sneijder had this to say:

“”I would like to remain,” Sneijder said in an interview in July’s Italian issue of Vanity Fair magazine. “I have marvellous team-mates. My wife Yolanthe and I love Inter, the Italian fans and Italy.”

Inter also seem to want to keep the player, as reported by Sky Sports News:

“”We know what we have to do and there are no meetings planned with his agent. Sneijder is not for sale.” Marco Branca, Inter Milan Technical Director

So given the stance of both player and club, it seems a move for Sneijder is dead in the water. However, various sources such as The Sun and the Daily Mirror have reported that this is all a ruse, and that it is a ploy of Inter’s in order to drive the price of Sneijder up. Now these sources aren’t the most reputable, but the fact that David Gill has delayed joining the team on their tour of the USA until Friday (Daily Telegraph), could suggest he is working on some sort of deal. The latest is that Gill is currently in Milan speaking with Inter representatives, but this doesn’t mean a deal is imminent, just look at the Sanchez situation last month.

If the Telegraph are to be believed, the club are currently in the process of tabling a £35M bid for Sneijder, and that Sir Alex is willing to abandon his policy of not spending big on older players. You only have to cast your mind back 3 years ago to when Dimitar Berbatov arrived at the age of 27, for £30.75M, to realise that if Fergie really wants a player, then age and price can be overlooked.

Various sources are also claiming that the major sticking point of any deal is the player’s wage demands, thought to be £250k a week . It is reported that United are unwilling to pay Sneijder this amount due to the fact it will make him the club’s highest earner, and cause possible unrest with the likes of Wayne Rooney (Daily Mail).

Sir Alex had this to say in his first Press Conference of the new season:

“”It would be impossible to get another Paul Scholes, but if we can get a player along similar lines in terms of the quality of his passing and vision, then yes we’d have to do something.”

There are not many players in the world who are similar to Paul Scholes in terms of passing and vision, so i believe these comments suggest that Fergie is looking for a quality. prove player; and Sneijder fits the bill quite nicely.

I think it’s fair to say that we ARE interested in Wesley Sneijder, and should it go through, Utd fans across the country will rejoice. I do however believe that the reported comments from both Sneijder and Inter are true, Inter would like to keep him and he wants to stay. It will take a very attractive offer to persuade them otherwise, and i think it’s a fair bet that Gill is currently working on a good offer. Whether or not it happens remains to be seen, but do not believe the utter drivel that is being reported from shady sources such as The Sun and The Daily Mirror; rather, wait patiently for some official news, and cross your both your fingers and toes!

One response to “Wesley Sneijder: Where We Are?”