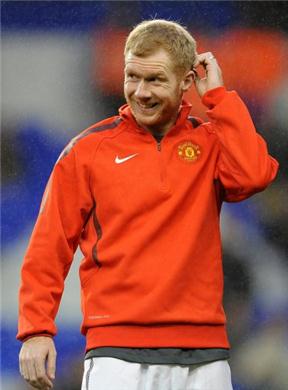 “He’s almost untouchable in what he does. I never tire of watching him play. You rarely come across the complete footballer, but Scholes is as close to it as you can get.” – Zinedine Zidane, 2010.

When it comes to footballers, Paul Scholes is a rare breed. He is not only the most naturally gifted English footballer of his generation; he is also famed for being a man of few words. An interview from Scholes is about as rare as Arsene Wenger actually seeing one of his players commit a foul, so it comes as a slight surprise to see Scholes’ latest comments about Arsenal:

“They may play the prettiest football, but it doesn’t always produce the results they need. It doesn’t irritate me [that people say they’re the best footballing team], because while they are doing that, we are winning games. They do play the best football to watch at times, but what is the point of that, if you are not winning anything? ” – Paul Scholes, 2011.

When it comes to football opinions, can you really argue against a man who has won every trophy club football has to offer? A man who has been at the top of his profession for 15 years? Scholes is essentially confirming what every football fan on the planet knows. Yes, there is no doubt that Arsenal play attractive football, and are only bettered by Barcelona in terms of style. But is it wise for Wenger to stick to his “pretty football” principle, given the fact Arsenal have won absolutely nothing for the last 6 years? Or is this just stubbornness? Sticking to your principles is one thing, but blindly ignoring the facts is another thing entirely.

What these “football purists” seem to forget, is that a strong defence is just as important as a strong offence. Yes, the “We will score more goals than the opposition” might win you some games against the lesser sides, but against a strong football team, this strategy is ill-advised at best.  A quick look at last season’s statistics shows Arsenal were only outscored by one team: Manchester United. On the other hand they also leaked more goals than Utd, City and Chelsea, and conceded the same amount of goals as 8th placed Fulham. Defensive frailties however, are not Arsenal’s main problem.

Watching Arsenal play is an entertaining, if not frustrating experience. A typical period of possession for Arsenal includes a few fancy 1-2s, slick passing and an absolute refusal to shoot in good positions. When it comes off, it is spectacular, but how many shooting opportunities have to be sacrificed in the search for this spectacular goal? For me personally, I don’t care how we score, as long as the ball ends up in the back of the net. Sure a great team goal is great to see, but a scrappy tap-in does the same job.

Both Arsenal fans and players are starting to lose patience. Fabregas and Nasri look set to leave, in search of trophies and accolades, and the fans are growing frustrated with Wenger’s flat out refusal to buy quality players. It seems the great man, is so blinded by his own football philosophy, that he cannot see the forest for the trees. His tenure at Arsenal will ultimately be judged in the success he brings to the club, not the intricacy of the goals his team scores.

So in essence, you have to ask yourself: Would you like Manchester United to play more entertaining football? Of course you would. But would you like us to compromise our position as the best team in England in the process?  Give me a bulging trophy cabinet any day.