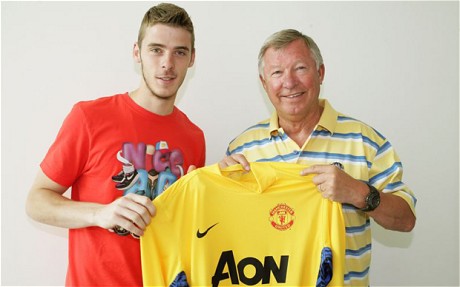 David De Gea is officially a Red Devil and has signed a five-year deal with a reported transfer fee in the neighborhood of £18M.  This marks the third signing of the summer as Sir Alex brings truth to the fact that he has been handed a substantial transfer kitty.  Ferguson has already splashed over £50 in players already without landing, what United fans are hoping for, the marquee signing of the summer.  Who that is remains to be seen.

De Gea, at 20, is one of the brightest talents in the footballing world today.  He has just returned from winning the U-21 European Championship and last season won the Europa League and the European Super Cup with Atletico Madrid.  He is uncapped at the moment since he is currently sitting behind 3 other world class keepers (which just shows how amazing Spain really is) in Casillas, Reina, and Valdes ahead of him, but being 20 and now at United, he will have his chance to shine.

De Gea told United’s official website, “I feel very proud and I can’t wait to start playing here. When a club the size of Manchester United comes in for you it obviously makes you very, very happy. I saw their interest as an extra motivation to work even harder to show off my ability. It’s a great privilege to be part of a club like United and I’m keen to do my best and show what I can do.”

I am also excited to see what he can do.  I know that Ferguson has been monitoring his progress since Van der Sar officially set his retirement date, and the rumors about him joining United continued to flow.  De Gea was clearly at the top of his list and he has persuaded the Spaniard to make the move to England.

This signing is the answer to one of our very large questions, and hopefully the other one is answered soon.  The replacement of Paul Scholes will be a much harder and more expensive question to answer, and currently it seems that all of our potential targets are either staying or moving elsewhere.  There is still plenty of time left in the window, but this last question is one that is not as clear as the other.