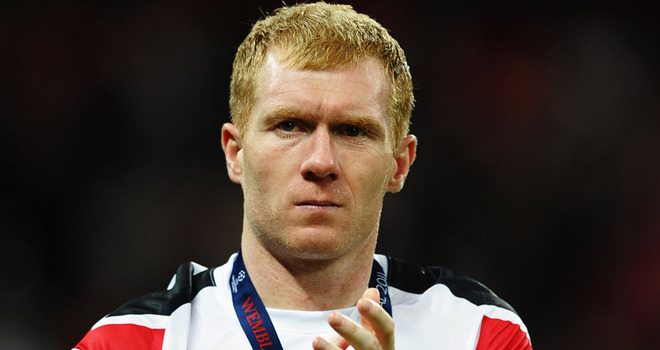 We may be the most successful club in England of all-time, but there’s something missing in Europe. And now, with Paul Scholes’ retirement, we look a little empty in the middle of the park.

Our dismantling against Barcelona proved how little dominance we have in central midfield without the power of Scholes. Michael Carrick may have turned his form around, but playing Giggsy doesn’t work – a winger in centre mid never does. Darren Fletcher was out for the majority of last season, and Darron Gibson showed signs of promise, but never enough to cement himself in the United line-up.

Every United fan put a lot on Scholesy’s shoulders to deliver every single week – his sporadic passing was second to none, and everyone knew it. But when he’s gone, that’s that – there’s no ready-made replacement waiting in the wings.

Anderson was signed in the hope he would progress quicker than he has. Carrick and Fletch are still just squad players, and Gibbo never hit the grade. And although Owen Hargreaves’ £17m price tag indicated he’d be in the starting XI every single week, his injuries thought otherwise.

So what do we do now?

Well, the rumour mill is well and truly under way, and everywhere you look seems to be another report linking us to Wesley Sneijder, from Inter Milan. Some say £35m cash, others say some form of swap deal involving Nani. Either way, the attacking midfielder may be the answer to United’s prayers. A real presence in midfield, he helped Inter Milan win their Treble two years ago, helped the Netherlands reach a World Cup Final last year, and has become one of the most sought-after players on the planet.

His passing is like that of Scholes, and he can be a character on the pitch, which is exactly what is needed – a leader in the middle. However, although form is temporary and class is permanent, his game may not be particularly well suited to the Premier League. It will be the signing every United fan wants to see, and it will definitely make us a better team, but whether it alters the shape of Europe… Only time will tell.

Other reports have linked us with Luka Modric, the Tottenham playmaker. Fergie has been a fan for years, and we were linked with making a bid when he signed for Spurs in 2008. He can run the game from midfield, but does enjoy attacking the goal, which leaves the middle vulnerable. However, he is a Tevez-like figure, always willing to win the ball back, and always looking to push play forward. Spurs Chairman Daniel Levy wants upwards of £40m, according to reports, despite releasing a statement saying Luka would not be leaving the club. Already proven in the Premier League, he’d be the sensible man’s choice.

Having already spent upwards of £35m this summer, on Phil Jones and today’s confirmation of the signing of Ashley Young, don’t expect Fergie to be waving the chequebook at clubs when he doesn’t see value. Modric may be a cracking player, but there’s no way the market shows any form of value any more – it was distorted the minute Liverpool were quoted £20m for Jordan Henderson. Now everyone has a yard stick to measure how much their players are worth, in comparison to the young Englishman.

However, there were strong hints on social networking sites today that United are in fact looking at other options too. Names touted around so far include Kaka, Lassana Diarra, and the Samir Nasri rumours just won’t go away. Of course, every one of these rumours come from people ‘in the know’ – but are we not all in the know when we’re sat on Wikipedia cherry-picking great stories to gain more followers?

There may be some truth in the rumours, and I may be forced to eat my words, but Sneijder and Modric seem to be the clear choices to join United at some stage this summer. Any acquisition in midfield will not be made to add youth, or for potential, but to rocket us to Champions League victory, and to turn a hungry, youthful team into world dominators.

One response to “A Central Mid Is The Key To Success”